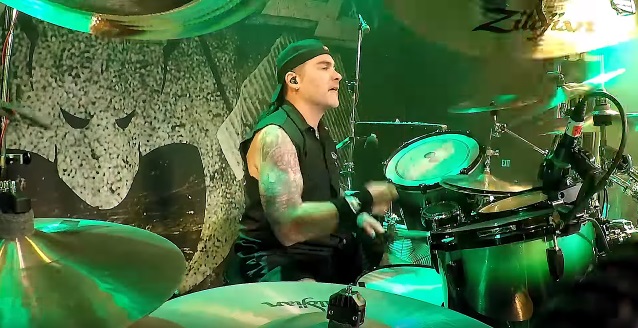 Sick Drummer Magazine has uploaded drum-cam footage of OVERKILL drummer Jason Bittner performing the song "Mean, Green, Killing Machine" with his bandmates on September 26 at the Summit Music Hall in Denver, Colorado. Check it out below.

OVERKILL singer Bobby "Blitz" Ellsworth recently said that Bittner has elevated the band's musicianship since the drummer joined the New Jersey-based group this past spring.

Ellsworth spoke about Bittner's addition to OVERKILL during an interview with That Drummer Guy. He said: "We have a longstanding relationship with him. I used to call him 'Kid' when he used to show up, 'cause I'd always forget his name. I think he was eighteen years old, and he was a friend of Tim Mallare's [OVERKILL drummer, 1993-2005]. And this is back during those dark days of metal. We still got the opportunity to tour back then, because we figured it out and we wanted to do it. And he would show up in the upstate New York area — around Albany, Saratoga and there's a bunch of areas up in upstate New York we used to play all the time — and he'd always show up with sticks in his back pocket, as if he was gonna be the drummer that night. And I'd say, 'Hey, kid, you got your sticks?' [Laughs] And I guess there's ten years, ten or eleven years, between Jason and I. So [at the time I was] twenty-eight, [he was] eighteen, or seventeen, something like that. And he's always been in touch with us."

He continued: "When [Jason] got into SHADOWS FALL, I'd run into him on the road. He showed up in Los Angeles one time at a NAMM convention — we were doing a show on the Sunset Strip — and he said, 'Can I play? Can I play?' And I was, like, 'This kid is cut for thrash. This is what it's all about.' So when Ron left and Eddy came in and was temporary for us, when we really got serious about saying, 'Where are we going with this?', he was really the only name that came up. We said, 'We know him, he's got an East Coast personality, he's kind of from our area — he's a few hours north of me — so we understand each other; the sense of humor is the same. Which is huge for us — we don't wanna tour with guys that we don't wanna be with; we wanna be able to tour with guys that we know. And he knows the shit. So regardless of what he's done in the past, I can always say he was really one of OVERKILL's first drum groupies [laughs], [standing] on stage waiting for Tim Mallare to… 'Oh, Tim can't play tonight. I got it.' [Laughs] So he's a thrashhead through and through, and I think that's where his heart is. And he obviously feels very at home with this, and, to some degree, has brought us up a level with regard to musicianship when it comes to his abilities."