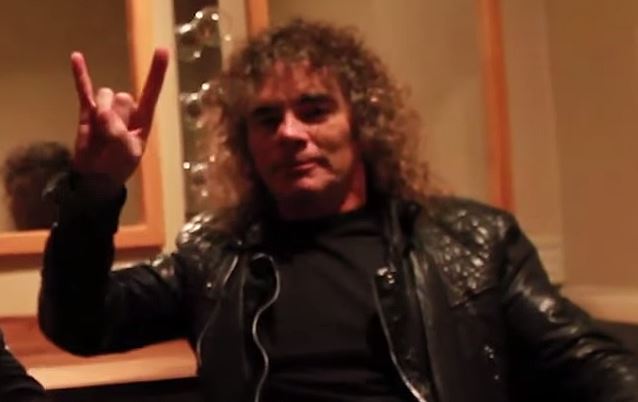 Char Tupper of MetalTitans.com recently conducted an interview with vocalist Bobby "Blitz" Ellsworth of New Jersey thrashers OVERKILL. You can now watch the chat below.

Speaking about the progress of the songwriting sessions for OVERKILL's follow-up to 2014's "White Devil Armory" album, Ellsworth said: "Well, we just started the stove. You know, we just filled the pot with water and… But we're kind of always writing, so it's really easy to spill that information. I mean, if you do this for as long as we do, there's no, like, vacations on desert islands and supermodels and cocaine problems. We're hard-working New Jersey guys, so we're happy to be working. So, again, we're always writing. But I think one of the more interesting things that I've noticed about the later years for us is that there's less communication about what we're gonna do. It's more about unspoken communication, so that I surprise Dave [Linsk, guitar], who surprises D.D. [Verni, bass], and D.D. surprises both of us. And that's kind of like, 'Wow, that's really cool. I never thought of that.' As opposed to trying to ratchet it down with words, because words and music are not necessarily… It's not the best way to write music, especially this. We have no identity crisis; we know who we are. I can tell you this: I'ts gonna be an OVERKILL record , for sure, and I think that that's the honest answer."

OVERKILL's first worldwide release on Nuclear Blast is a special box set comprised of the band's entire back catalog, made available on September 18. Titled "Historikill: 1995 - 2007", it contains 11 OVERKILL albums on 13 CDs and a bonus CD (containing demos, remixes and an unreleased cover song) in digi sleeves.

OVERKILL and SYMPHONY X have joined forces for a North American tour in September/October. The 24-date co-headlining trek launched at The Palladium in Worcester, Massachusetts on September 18, and will wrap up with a very special night at Terminal 5 in New York City on October 17 — the first time in the bands' combined histories that they'll play a show together in their own backyard.

"White Devil Armory" sold around 8,400 copies in the United States in its first week of release to debut at position No. 31 on The Billboard 200 chart. The CD was released on July 22, 2014 in North America via eOne Music and on July 18, 2014 in Europe through Nuclear Blast Records. The effort was tracked at Gear Recording and was mixed by Greg Reely, who also worked on 2012's "The Electric Age".