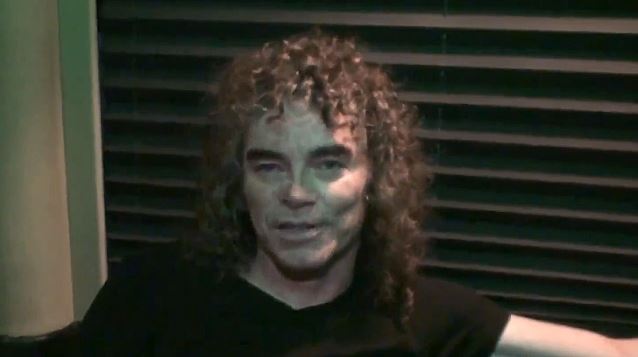 Each episode of Digital Tour Bus's "Tour Pranks" features an artist telling one, or more, of their favorite prank stories from being on tour. The latest episode, which can be seen below, focuses on vocalist Bobby "Blitz" Ellsworth of legendary thrashers OVERKILL.

Said Blitz: "I think one of the main things about staying happy on tour is being able to laugh and being able to have a good time. A lot of the work goes in prior to the tour, and when you get out here, it's really about the release. So playing jokes is… I mean, that is the best part of getting together with a group of guys that you see a hundred and fifty nights a year and pranking on each other and pranking on other bands."

He continued: "It just brought to mind this prank we had done. It was a band that had opened for us. The band was called SEVEN WITCHES and their singer's name was James Rivera, out of Houston, Texas. And James is short in stature — approximately 5' 1" or 5' 2"; a shorter dude. And I remember that he would run out onto the stage. So what we had done was before, we had taken the microphone and extended is as high as it could possibly go and then put another link in it. And then in front of that, we put a chair. And then we held James back until the only way he could hit that first note was to climb up on that chair to get to the microphone."

Blitz added: "All in good fun, James. I hope you remember the story."

OVERKILL recently inked a new worldwide deal with Nuclear Blast Records. Previously signed to the label for Europe only, OVERKILL's first worldwide release on Nuclear Blast will be a special box set comprised of the band's entire back catalog, due out this fall.