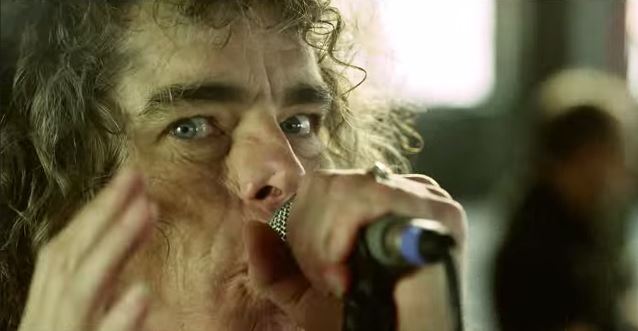 Niclas Müller-Hansen of RockSverige.se recently conducted an interview with vocalist Bobby "Blitz" Ellsworth of New Jersey thrash metal veterans OVERKILL. A couple of excerpts from the chat follow below.

RockSverige.se: The song "Another Day To Die" [on OVERKILL's new album, "White Devil Armory"] made me instantly think of your health scares.

Bobby: I've had a few issues come up. I canceled a show in Hamburg and ended up in the hospital with borderline pneumonia and all this shit. I remember sitting in the German hospital, trying to recover from this and this guy came in and told me I had six months! I sat up all night and remember going through my computer, "Who do I owe money to?, Who owes me?" My wife was on vacation and I didn't wanna ruin her vacation with it, but it was a fucking awful 12 hours. I wasn't really expecting that and I never expected it to come as news to me in broken English. In any case, the next day the woman who was in charge came in and said, "What are you talking about? No, you have to change your habits or in six months you'll be in another hospital again." And I was, like, "Fuck!" and I had already scratched down "Another Day To Die". [laughs] So I suppose I got my wish. [laughs] But what are you gonna do? Right at that moment, I stopped smoking tobacco. Actually that night, I didn't care. I went out on the balcony and I was smoking and wondered if there was a liquor store so I could get a few beers up here too. [laughs]

Bobby: Bulletproof. I think is one of the characteristics that you need to be in a band. I've had some health issues in the past. If this had happened at home, I never would've told anyone, but it happened on the road. I still thought I lived a healthy lifestyle, and to some degree, I am. To be able to do this at my age, I just turned 55, and I don't think of myself as someone who is unhealthy. I think of myself as bulletproof still to this day. I live by the philosophy, a person told me this, "It's not about my problems, it's about getting through my problems!" I think that's pretty simple, because if you can see through the problems, I think they always have that brighter spring day on the other side of it.

RockSverige.se: You always look so fit. How do you stay in shape?

Bobby: I do more of the cardio thing now. I'm really into hiking, and there's small mountains all around looking out my window. I climb these mountains twice a week with my 7-year-old German shepherd. We go hunting and we go looking for bear and animals in the forest every week. It just becomes what my body needs. If you hear the record, you don't hear the clouds or the shadows of age, but you hear more so the youthful exuberance we had in 1985 or '86. Whatever I'm doing, it seems to always work for me.

Bobby: The low point is obviously the health issues. I remember back in '99 when I was going through cancer screening all that crap, and you have to wait. You didn't go in and they say, "Oh, you have cancer! We're gonna fix you and you'll go home at 4 o'clock and be better." That's just not the way it is; you have to wait. It's a cross to bear. My first thought wasn't about death, it was more about, "Shit, I won't be able to do OVERKILL anymore!" But at the same time, it was something in there that said, "If that's what I'm thinking and it's worth so much to me…" So I remember, I called D.D. [Verni, OVERKILL bassist] and he said, "What do you need? Do you want me to come up?" and I said, "Do you know what I need? I need a song! You've got anything laying around? I'd really like to work on some stuff if you have it, instead of just sitting around here waiting." About three days later, I got some really rough demos and I wrote the song "Necroshine". I think somewhere in there it became the lowest point and the highest point simultaneously. It became a vehicle to walk through the problems and to actually understand that it wasn't about me anymore, it was about not being the most important and it was out of my hands and I had to accept it.