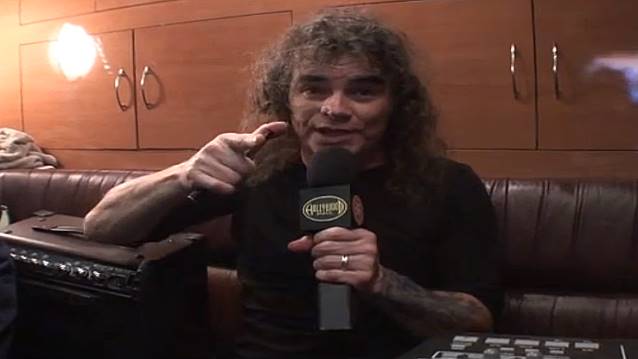 Groovey of Groovey.TV conducted an interview with vocalist Bobby "Blitz" Ellsworth of New Jersey thrash metal veterans OVERKILL on November 8 at Gothic Theatre in Englewood, Colorado. You can now watch the chat below.

On the progress of the recording sessions for OVERKILL's new album:

Ellsworth: "Yeah, the music's all done. It's been recorded. I'm working on vocals right here [on our tour bus] just on my eight-track. I've done probably the last six records on that. I'm just used to it. It's not state of the art or anything, but it's just something that I download all the tunes into. I'm about 80 percent done [with the vocals]. And we're gonna go home record it.

On OVERKILL's musical approach on the new album:

Ellsworth: "One of the things I like over the last three records, I think we've had an energy resurgence, and I think that one of the reasons is Ron Lipnicki on drums. He's just brought a youthful surge to us. It's funny when the kid in the band is, like, 46. [laughs] But I also think one of the things that's given us that surge is that I've had the opportunity to tour right before I've either finished or right as I finished, so I when I get to go in and record, the last thing in my mind, for instance, is the Gothic Theatre. And that's something you can't feign behind a microphone in the studio. But if it's pretty fresh in my head, it just kind of comes out.

"It takes me six weeks to get rid of the tour — to shake off the ghosts and everything. Even my wife says, 'I need three weeks for your voice to lower, because you're yelling everything, and then I need another three weeks for you to be my husband again, to be this normal guy tjhat's not running around picking his nose, drinking a beer for breakfast. [laughs] Fartin'. [laughs] She calls it the middle-age boys club. We're out here rolling dice and smoking Cuban cigars and losing all our money and stuff.

"But she knows it makes me me, and you can't do this for as long as people have, like D.D. [Verni, OVERKILL bassist] and myself and the other guys, without really supportive people in your family. If it's miserable at home, we're middle-aged dudes, bordering on old in some cases. You don't wanna be out here while there's hell to pay at home; you don't. And I think it's kind of cool that we have found people in our lives that kind of understand that."

As previously reported, OVERKILL released a very special limited tour edition of its latest album, "The Electric Age", in Europe on April 19 via Nuclear Blast Records. The limited 2CD tour edition includes the regular album as well as a four additional live tracks on a bonus CD, recorded at The Metro in Sidney, Australia on September 25, 2010.

"The Electric Age" was recorded and mixed at Gear Recording Studios in New Jersey, owned and operated by OVERKILL bassist D.D. Verni.

OVERKILL was forced to drop off the "Dark Roots Of Thrash" tour with TESTAMENT in February due to Ellsworth's bout with pneumonia. 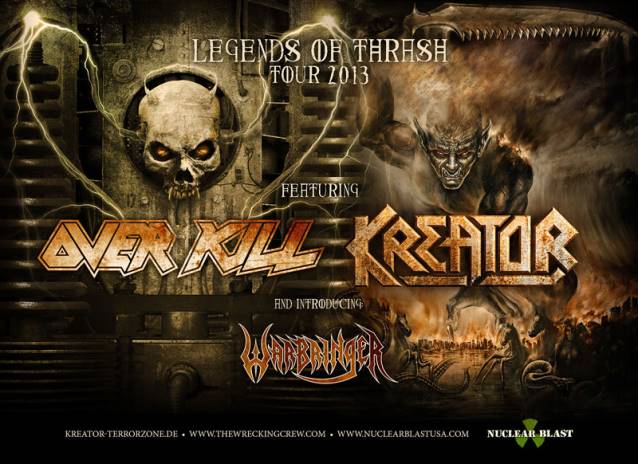