Commented OVERKILL vocalist Bobby "Blitz" Ellsworth: "Let the killing begin — yes, yes, yes, here we go again. With a lead foot and speed, and a hammering stampede, as our ears they will bleed... we are preparing to start recording our next project... indeed. The riffs and ideas have been flying and exploding, all systems are go and the 'wheels' are rolling. This October, the next OVERKILL, we will be there...will you?"

OVERKILL is scheduled to enter the studio this month to begin recording the drums for the follow-up to 2014's "White Devil Armory", tentatively due in October via Nuclear Blast.

Regarding how OVERKILL approaches the songwriting process nowadays, Blitz told Metal Wani: "What we do is we couple where came from and where we are. Where we came from is the days of rolling two-inch tape, being in a room together, feeling the music, feeling the walls, sweating… That's the old-school way of doing. So that's the way it's gotta start. But then as it starts developing, we start using more technology. We start using Pro Tools. We go to different studios and we'll work simultaneously. Dave [Linsk, guitar] will be in Florida doing some guitar leads. I might be in Jersey doing some vocals. D.D. [Verni, bass] might be dropping some bass down at his home studio. So it becomes this really cool process of being able to upload those files at the end of the day, have the other guy pull them down and go, 'Oh, I see what he's doing now.' So we use both. We're in the room together, and then later on it develops into a wonderful world of Pro Tools and file sharing over Dropbox."

Blitz also talked about the general musical direction of OVERKILL's new material and how it compares to some of the band's previous efforts. He said: "I never can really tell until it's done. I mean, that's always the surprise for me. I know even before we start the record it's gonna be an OVERKILL record. But when it's taking shape, I can't say it feels like this or it feels like that. It's more the more current OVERKILL. And what I mean by that is that it's got that 'Ironbound', 'The Electric Age', 'White Devil Armory' feel to it, with the way especially the drums have been written. And I think that's probably the only characteristic that is solid right now in this opinion, because everything else has changed around, which is kind of cool at this point."

OVERKILL played a special anniversary show on April 16 at Turbinenhalle 2 in Oberhausen, Germany. The evening saw the band perform their classic records "Horrorscope" (which is celebrating its 25th anniversary) and "Feel The Fire" (30th anniversary) in their entirety. And if that wasn't enough, the show was professionally filmed and recorded for an upcoming DVD and CD. 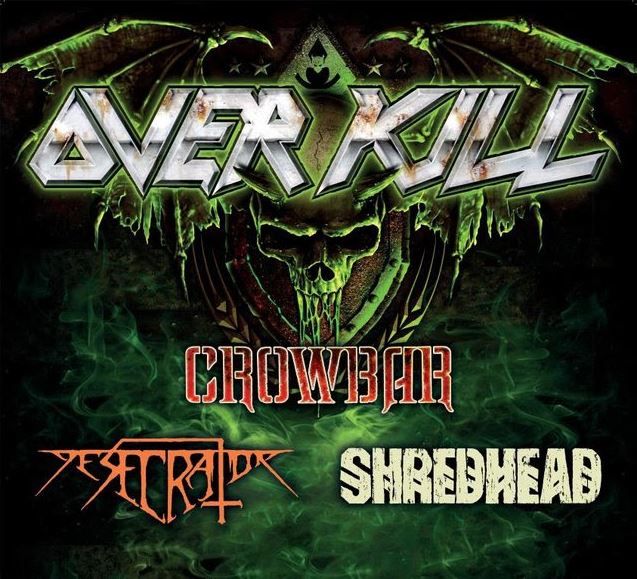