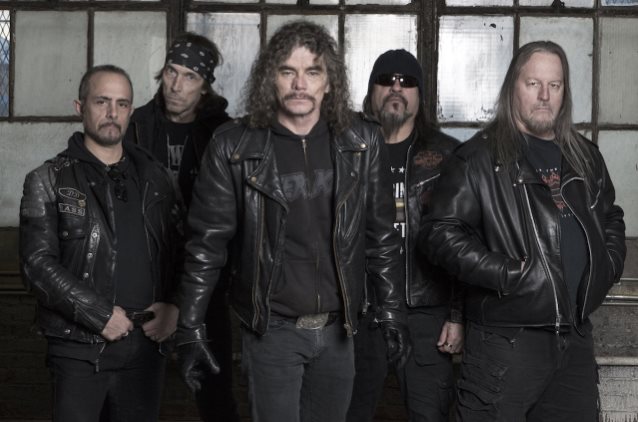 Metal Assault: I think [the new OVERKILL album "The Grinding Wheel"] has a more epic feel and there are longer songs, but in a good way. It's more dynamic. The overall length of the album is also more than the last few. Why do you think it came out like that?

Blitz: "You're correct. I think in the OVERKILL school, saying that you don't give a shit really frees you up. When somebody says, 'You realize that's seven and a half minutes?' I don't give a shit, it sounds right. [Laughs] I think that works, because if it's right, it's right. There's a great feeling when we're doing a record that we have nothing to lose. That's what makes it dangerous and gives it a sense of reality that encompasses the whole project. So, going in there and thinking with regards to time and length only takes that sense away from you. What we were doing was writing good songs and trying to separate them based on the emotions we felt while doing so. When there was a punky feeling, we pushed it on to a song like 'Goddamn Trouble'. When there was a heavy groove coming, we pushed it. When it was straight-out thrash, we wrote 'Our Finest Hour'. 'The Grinding Wheel' [the title track] is where we pushed the epic vibe. So, there was separation between all the songs, and then a larger separation. Now at the end of the day, stamping the OVERKILL brand on it, we made something that has diversity."

Metal Assault: And the fact that you've been able to put out an album every two years also must free you up and put less pressure on you, because it's not like you're putting out an album for the first time in seven, eight years where everything depends on it, and what if people don't like it, and that kind of thing.

Blitz: "Yeah, this works for us. This is what gives us visibility. We're not on everyone's lips until we're touring, or we're on a festival, or we're releasing a record. We understand that. There's never been an identity crisis here with regard to what our popularity is, or who we are. So, I think when we work on our schedule, it's better when we're working than when we're not. It keeps our visibility up, and at the same time keeps us on a schedule where we can actually do something to improve ourselves, even eighteen records down the road."

Metal Assault: In terms of the lyrical content, do you try to write it all fresh for an album, or sometimes do you go back into your own archives or vaults where you might find something that you haven't used yet?

Blitz: "Well, obviously, repetition can be a bad word here, and there's a fine line between style and repetition. I try to dance that tight rope. I don't necessarily like to repeat myself. I like to cleanse my sins of the prior year and a half, or the experiences I've had, and sing about things I know about in abstract, interesting type of ways. Probably the thing I know most about in my life is what's been introduced to me through this band. I don't voice political feelings or principles that I have, and I stay away from social issues a lot of the time. But I do speak about the band, about the community, the principles we have and how they can be applied to life, or at least how I apply them to my life. 'The Grinding Wheel' is obviously about work. It's about understanding work. Work hard and you'll be the happiest guy in your house, that kind of thing. That's really worked out for me. I know I'm not what I was when I was 22, but I can accept and embrace that."