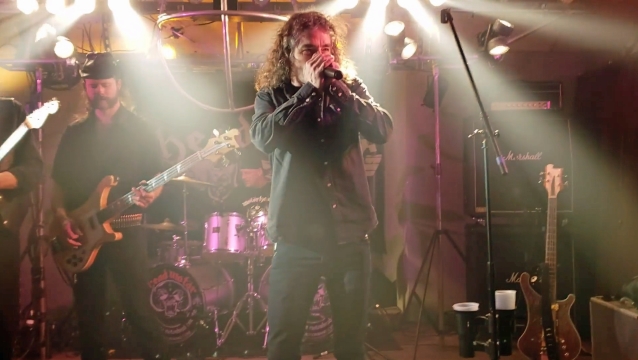 Video footage of OVERKILL singer Bobby "Blitz" Ellsworth performing the MOTÖRHEAD classic "Overkill" with the MOTÖRHEAD tribute band HEADMOTÖR on February 22 in Jamesburg, New Jersey can be seen below (clip filmed and uploaded by Chaney Weiner). The event was a record-release party done for OVERKILL's 19th studio album, "The Wings Of War", which was released that day via Nuclear Blast.

In a 2016 interview with "Talking Metal", Ellsworth recalled touring with MOTÖRHEAD for the first time more than three decades ago. "We did a triple bill across the U.S. which was SLAYER, MOTÖRHEAD and OVERKILL, and I think the record they were doing was '1916'," he said. "It was when they had two guitarists, Phil Campbell and Würzel [Michael Burston], and Lemmy, obviously, and [Phil] 'Philthy Animal' Taylor on the drums. Through the years I'd run into these guys. Würzel had left and Mikkey Dee had come in on drums and Lemmy would still remember your name: 'Hey, Bobby Blitz, how are you? Or, 'Hey, Bobby Blitz, stop into my dressing room.'"

He continued: "A lot of my memories with him are personal, but this one was public: In 2008, touring with them through Europe. We were in Germany on the last show, and my light guy, Big Eric, says, 'Lemmy wants to see you for a few minutes.' He goes to me, "I want you to sing 'Overkill' with me tonight.' I go, 'Fuck. This is going to be great.' I know the song cold, but I was nervous, now I'm doing it with the guy who wrote the song. I wrote the first word of each verse on my forearm. Once you have the first verse, you're in. Sure enough, he catches me in the middle of the song and yells right into my microphone: 'Cheat notes!' in front of 10,000 crazy MOTÖRHEAD bangers in Berlin. I totally panicked and dived into the audience. He's looking over at me and still to this day, I can see his toothy grin mouthing the words 'Cheat notes!'"

"The Wings Of War" was recorded at Gear Recording Studio in New Jersey, SKH Studio in Florida and Jrod Productions with engineering handled by bassist D.D. Verni and guitarist Dave Linsk. The album was produced by the band while Chris "Zeuss" Harris took care of the mixing and mastering. Travis Smith (NEVERMORE, OPETH, SOILWORK, DEATH) was again enlisted to create the artwork for the album.

Here's video #2 (and a GREAT one at that) from last night's Overkill Record Release Party put on by the OB Militia Foundation at the Jamesburg Elks in Jamesburg, NJ...which featured the Motorhead tribute band Headmotor.

This one features Bobby Blitz on vocals singing the song that is also the name of the band he sings for.