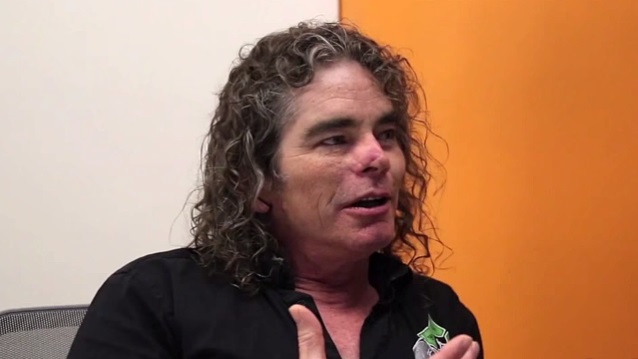 Matt Coe of Eternal Terror recently conducted an interview with vocalist Bobby "Blitz" Ellsworth of New Jersey thrash metal veterans OVERKILL. A couple of excerpts from the chat follow below.

Eternal Terror: "White Devil Armory" is the latest OVERKILL studio platter — and I've heard early reports from you describing this album as having more of a "3D" sound in terms of songwriting and dynamics than your last two records which were well received, "Ironbound" and "The Electric Age". Can you elaborate on this set of songs and your view of what took place recording-wise, because I agree that this seems to have a different level of depth while still maintaining that OVERKILL substance you've been known for through the years?

Bobby: I didn't necessarily make that comment in regards to "Ironbound", because I thought that that was really a three-dimensional OVERKILL record, containing more elements than, let's say, "The Electric Age" — and this is not to slag that record because it is one of my favorites through the years. It's just... I suppose it's "balls out" in regards to the two dimensions, whereas what we have with "White Devil Armory" is a little more than that. At the end of the day, it's still OVERKILL, but to get to the end of the day, there is a half time, punk rock kind of vibe here and there. There is thrash, which is the highest in the pecking order, and there is even rock and roll. What we are saying is "The Electric Age" was more of a thrash record, two dimensional and this is more of the eclectic value that OVERKILL can have but still being an OVERKILL record at the end of the day.

Eternal Terror: How is it working with two different record companies for the major territories these days between eOne in North America and Nuclear Blast for Europe? It seems to me you have the best of both worlds, as both have their strengths in their particular marketplaces — and allow OVERKILL to do what they do best, concentrating on your own music aspects...

Bobby: That's a good point. They have good metal departments with guys who have been in the scene for a long period of time, who like this stuff. They are not the kind of guys who call up and ask how much profanity is in a particular song; that's not the way it works anymore. They sign bands based on their like or love of those bands, as well as obviously a business decision, because there's always a bean counter involved in there somewhere. For our position, in regards to both these labels right now, it's a great position to be in. They work in cooperation; eOne has been distributing Nuclear Blast stuff, so it's not like they are banging up against one another for a release date. This frees the band up to do what we do best, which is to make music. Of course, we want to be involved in the business decisions. To a large degree, we are self-managed. We do have a third partner, but up until a few years ago, we have been self-managed since the mid 1990s so a lot of these decisions we had to make on our own. Now that things are a little more fruitful we want to be part of those decisions too.

Eternal Terror: How do you balance the changing tides with new technology and recording studios at home? Things are easier for bands to make records. Are there particular tricks of the trade you still pay attention to being an older band?

Bobby: You have to keep your eyes open with regards to technology or you get left behind. It's great to be that purist who [wants] to record on magnetic tape but it's unrealistic in this day and age unless you have unlimited time and unlimited funds; it's just more expensive to do. As people say, downloading ruined the music industry. Well technology, the downloading, etc. has also made it so that everyone can record something that is at least pretty good sounding, and I think people who really pay attention stay up with regard to having objective talented ears mix their stuff, as we do with Greg Reely, [and] they have the opportunity to take things a step further. Sure, the downloading may have hurt your finances, but it can cost you 1/10th of what it cost to make a record 25 years ago. It's not the same world anymore. I really think the key to making a great record is understanding performance. Not overthinking it, but really performing it. There is so much software out there, you can go in and sing out of key, burp, and it can be removed to some degree so you really only have to do it once. I can say this for myself, and I know the other guys do too with regards to their instruments, there's a huge pride in being able to perform. One of the things I do, and I take this all the way back to when I first started understanding vocals — THE ROLLING STONES or THE BEATLES, where these guys are doubling and tripling their vocals. I do that physically — singing over the top of everything I have already sang, layering it perfectly, not having a guy move it around on a computer. Because, to me, it sounds so much more natural when it is done correctly, and as a result, stands the test of time.