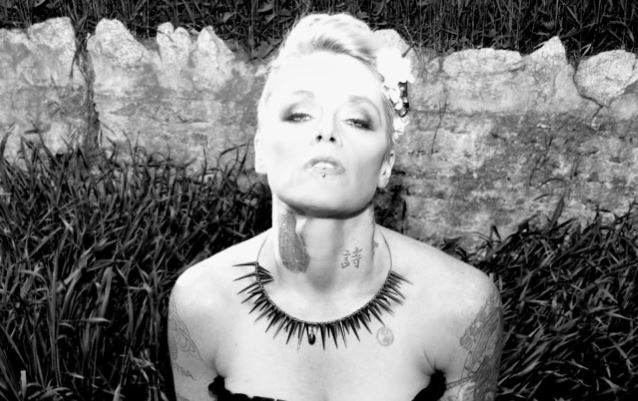 OTEP, the band led by singer, poet, illustrator, author and activist Otep Shamaya, will release its seventh studio album, "Generation Doom", on April 15 via Napalm. The CD was produced by Howard Benson, who has previously worked with such acts as MOTÖRHEAD, PAPA ROACH, THREE DAYS GRACE, FLYLEAF, P.O.D. and HALESTORM.

Commented Shamaya: "Revolution is the opiate of the artist. In pain. We remain. But healed in the sweet addiction to art. We are.

"For this album, I unleashed my soul and allowed it to soar freely. I communed with the moon in the chrome of its light. I kissed the sun at its fiery height. I waged war with the Nightmare Kings, I sinned with the opalescent women in the roaring seas of poetry. On a cycloptic mare, hooves made of iron and air, I charged into the inky heart of art and roared at the old gods in the ashes of their ruin, 'You can't look away, WE ARE YOUR MISTAKE. WE... ARE... GENERATION DOOM!"

OTEP's sixth full-length studio album, "Hydra", sold around 2,900 copies in the United States in its first week of release to debut at position No. 155 on The Billboard 200 chart. The CD was issued in January 2013 via Victory Records.