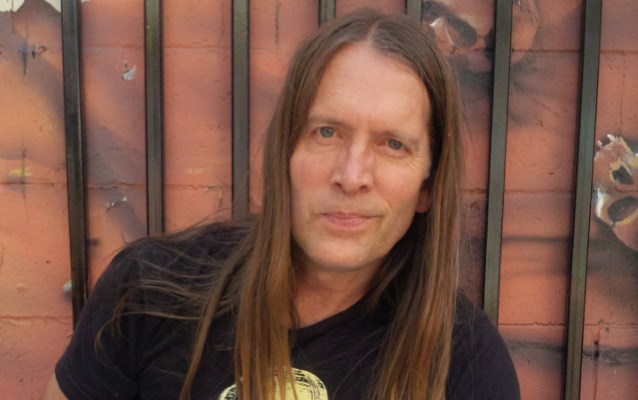 Original TROUBLE drummer Jeff "Oly" Olson has decided to leave THE SKULL, the band he formed with fellow original TROUBLE member Eric Wagner (vocals) and longtime TROUBLE bassist Ron Holzner. "There is no animosity in the band and it was a friendly departure," reads a statement from Olson's wife and publicist, Leigh Olson.

Jeff tweeted earlier today (Friday, January 16): "I loved jamming with @TroubleTheSkull, but it's time to depart and wish the band all the best! Looking forward to my next chapter..."

THE SKULL released its debut album, "For Those Which Are Asleep", on November 4, 2014 via Tee Pee Records.

Written and recorded last spring, "For Those Which Are Asleep" was the first full-length album to feature Wagner, Holzner and Olson since the 1995 release of TROUBLE's critically acclaimed LP "Plastic Green Head".

Asked in an interview with Wormwood Chronicles if THE SKULL's CD was "a real artistic statement or more an exercise in nostalgia," Olson responded: "Oh, in no way nostalgic, except in that it will become that. It was very cool, because we pre-produced the record with us meeting in Ron's practice basement. The hospitality is just amazing there. So we got together there about four or five times putting together all of the music, writing it, constructing it together, and it just kept getting better and better. Actually, it started changing a little as it went, it got heavier, and we were just constantly blown away by the freshness of the material."

He continued: "A lot of times when you turn in a project, you're just beating a dead horse, but it's not like that at all in these sessions. So the entire time we were working on the items together as a group too, we were able to turn it on time with no stress about that. We had time to tweak and go back, try different mixes, and positioning of songs, longer than you would if you were in a hurry trying not to go past your deadline like most bands."

Olson added: "I love the record and feel it represents a departure from all our bios that we cling to, our early roots. We have to, that's why we're still around. This is THE SKULL and we sound like THE SKULL. We actually hear a difference in ourselves that is pretty cool."