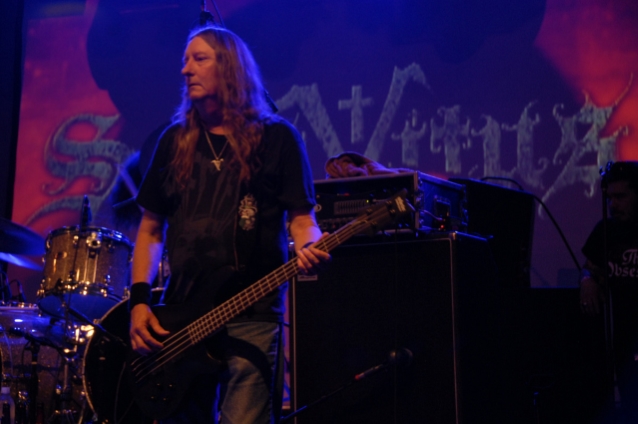 A GoFundMe campaign has been launched for original SAINT VITUS bassist Mark Adams, who is suffering from Parkinson's disease. All funds raised through the campaign will be directed to Adams's medical needs and ability to live.

Adams, who is not able to afford proper heath care and is in need of assistance, has been absent from some of SAINT VITUS's recent tours. Playing bass for the group has been former CROWBAR and current DOWN bassist Pat Bruders.

Parkinson's disease is a degenerative disorder of the central nervous system. It is mostly characterized by the trembling of hands, imbalance while walking and constant involuntary fidgeting of the body.

There is no cure for Parkinson's disease, but medications, surgery and multidisciplinary management can provide relief from the symptoms.

Parkinson's disease has been affecting many musicians in recent years. Singers Linda Ronstadt and Neil Diamond suffer from it, and in February, MR. BIG drummer Pat Torpey died from complications of Parkinson's disease at the age of 64.

JUDAS PRIEST guitarist Glenn Tipton was diagnosed with Parkinson's disease four years ago — after being stricken by the condition at least half a decade earlier — but only recently announced he was going to sit out touring activities in support of PRIEST's latest album, "Firepower".