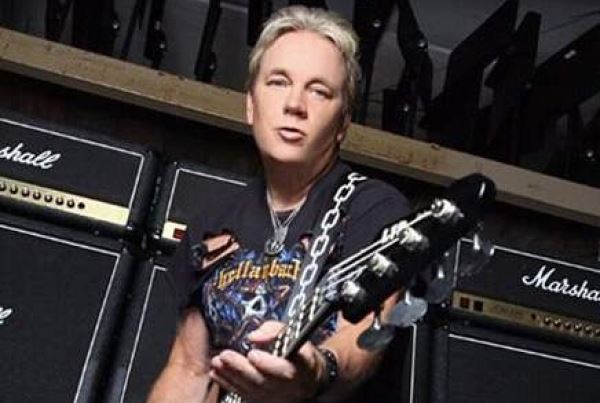 Bassist Craig Gruber died on Tuesday (May 5) at the age of 63 after a battle with prostate cancer.

Albeit not a household name, Gruber is best known as the original bassist in RAINBOW, having played on the band's first album, "Ritchie Blackmore's Rainbow". He was also a member of ELF alongside vocalist Ronnie James Dio, keyboardist Mickey Lee Soule, drummer Gary Driscoll and guitarist David Feinstein.

In the early 1980s, Gruber played with Gary Moore, touring with the guitarist in support of Moore's album "Victims Of The Future" and appearing in the latter's 1984 live LP, "We Want Moore". He also teamed up with Driscoll to form the band BIBLE BLACK, which produced two albums before Driscoll's murder in 1987.

RAINBOW was not the last time Craig hooked up with Dio; when Dio took over Ozzy Osbourne's role in BLACK SABBATH, bass player Geezer Butler left because he feared the band had no future without Ozzy. Craig filled in for Geezer and worked on sessions of what would become the "Heaven And Hell" album. Geezer later heard the sessions and returned to SABBATH.

In a 2009 interview with the Stone Cold Crazy blog, Gruber explained how he ended up in the earliest incarnation of RAINOW. He said: "Roger Glover and Ian Gillan finally — they weren't fired — they finally quit [DEEP PURPLE] for, like, the eighth time. They left in 1973. So, they hired Glenn Hughes on bass and vocals from TRAPEZE, and David Coverdale to do the 'Burn' album. Well, Ritchie [Blackmore, guitar] didn't like it because they're too soulful. Glenn's like a funk metal bass player. But he played with his thumb often, and Ritchie, if you played anything that's got any kind of a funk overtone to it, he'd give you that death ray and he'd stop playing and walk off the stage."

He continued: "There was this song Ritchie wanted to record; it was by QUARTERMASS, and it was called 'Black Sheep Of The Family'. It was just a little, simple song, but they wouldn't play it. They wouldn't record it and Ritchie — I mean, if you go against Ritchie, it's over.

"[DEEP PURPLE] went through the tour and [ELF] opened up for them for the whole year. I went backstage, and Ronnie and Ritchie were collaborating. Ritchie had this, like, $90 guitar with a hole in it, this acoustic guitar. He played it all the time. And Ronnie and him were sitting around, and they're writing. They're playing these chords and shit. I said, 'That's pretty cool Ritchie and Ronnie are getting along. Isn't that nice?'

"The next year, '74 came along, and we [ELF] were doing the 'Stormbringer' tour with [DEEP PURPLE]. I remember we were in Cleveland, Ohio when Colin, our road manager, said, 'Quick, get in the car. We're going to the studio today.' And I said, 'What are you fucking talking about? We're playing tonight.' He said, 'No. We've booked time in the studio. We've only got about four hours and we've got to get back to get a soundcheck. Ritchie and Ronnie have written a song and we're going to go in and record it.' What? So anyway, so we jump in the car. We went to this kind of shitty, crummy studio, downtown Cleveland, and Ritchie comes in, starts playing this riff. All right, he's smiling, he's kind of really super friendly, and it's really out of character for him. Ronnie said, 'We wrote this song, Craig. It's called '16th Century Greensleeves', which is one Ritchie and I had been working on. And we're just going to put out as a single, and it's going to be on Ritchie's solo album.' And I went, 'Wow, that's fucking amazing. We're going to back Ritchie Blackmore.' We knocked it out in about an hour. It came out great. There's some really cool stuff in it.

"That was actually the beginning of Ritchie Blackmore's RAINBOW. At the end of the tour, we had a little meeting between us and Ronnie came and said, 'I don't know if you know this, lads, but this is Ritchie's last tour. He's done with DEEP PURPLE and we're thinking about putting a band together. It would be kind of like the new DEEP PURPLE.' We just looked at each other and went, 'What?' He said, 'Remember the song we did? Okay, it's already pressed. It's already master mixed and they put it out in England and it's No. 7 on the British charts right now.' This was like about six months later. Ronnie also said, 'Ritchie liked the direction, so keep this under your hat. Don't say anything and at the end of the tour, ELF is no more, and we're forming a band with Ritchie Blackmore.' I'm, like, 'Holy shit, dude.' That was actually the beginning of RAINBOW."