A brand new project has been formed featuring original FEAR FACTORY members Dino Cazares (guitar) and Burton C. Bell (vocals). The band, which is rumored to also include bassist Byron Stroud (who played on the last two FEAR FACTORY albums in addition to touring and recording with STRAPPING YOUNG LAD and ZIMMERS HOLE) and legendary drummer Gene Hoglan (DETHKLOK, STRAPPING YOUNG LAD, DARK ANGEL, DEATH, TESTAMENT), will play a number of shows this summer as well as record a studio album.

Cazares and Bell were photographed (see below) "hanging out" together at the April 6, 2008 MINISTRY concert at the House of Blues in West Hollywood, California and have been rebuilding their friendship ever since.

In a September 2007 interview with MTV.com, Cazares — who currently heads up a new band called DIVINE HERESY — stated about his former group, "In the long run, I believe I came out the winner, and I feel that they have bastardized the name, and it's a completely different band, different style. I definitely carried the passion in that band, and my riffs, my style, they were very distinctive. I don't regret anything I created in FEAR FACTORY whatsoever. It will be part of my memory for the rest of my life. I believe I am continuing the legacy and keeping this metal torch alive and bringing it back with DIVINE HERESY. You can feel the hunger and passion in DIVINE HERESY, which I believe FEAR FACTORY has been missing, and is still missing to this day."

DIVINE HERESY, whose status is "unaffected" by Dino's involvement with the new project, is currently working on its sophomore album, "Bringer Of Plagues", for a July 28 release via Century Media Records. The band is once again recording with acclaimed producing team Dirty Icon (Logan Mader and Lucas Banker), which has previously worked with CAVALERA CONSPIRACY, GOJIRA, FIVE FINGER DEATH PUNCH and DEVILDRIVER. Cazares is also co-producing the new effort.

DIVINE HERESY's follow-up to 2007's "Bleed The Fifth" will be the group's release with new vocalist Travis Neal, who was previously a member of THE BEREAVED and PUSHED.

DIVINE HERESY's debut album, "Bleed the Fifth", has sold more than 30,000 copies in the United States since its August 2007 release, according to Nielsen SoundScan. The CD, which has shifted more than 50,000 copies worldwide, was issued in Japan with an exclusive bonus track, "Purity Defiled".

ARKAEA — the new band featuring FEAR FACTORY members Christian Olde Wolbers (guitar) and Raymond Herrera (drums) alongside vocalist Jon Howard (THREAT SIGNAL) and bassist Pat Kavanaugh (THREAT SIGNAL) — recently completed work on its debut album for E1 Music (formerly Koch Records). A new release date for the CD, which was originally due in March, has not yet been announced. 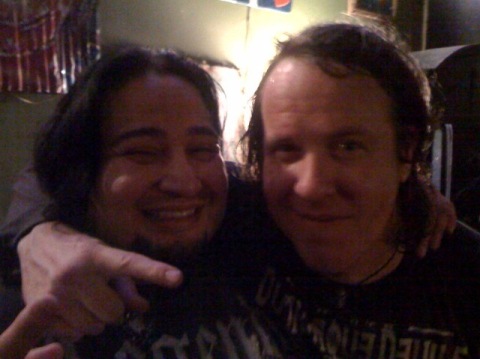