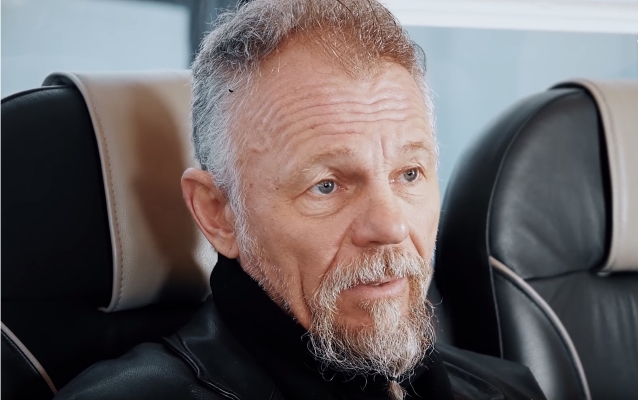 Prior to Swedish doom metal legends CANDLEMASS's February 7 performance in Paris, vocalist Johan Längqvist spoke with Duke TV. The full conversation can be seen below. A few excerpts follow (as transcribed by BLABBERMOUTH.NET).

On rejoining CANDLEMASS in 2018, 32 years after he performed on the group's debut album "Epicus Doomicus Metallicus":

Johan: "When they called me up, they said they wanted to get back to where it started again, to get some new inspiration, new energy. [They said,] 'Would you like to come over [and] listen to the album, and then if it feels good for you and you can do it?' The first time I went into the studio and I head this new album, I said, 'Pow — let me give it a try' immediately, and so we did. I started the recording almost immediately, because the songs really hooked me. They're great songs."

On his contributions to the group's new album, "The Door To Doom":

Johan: "When I came in, the album and the music and the lyrics, they were already written. The only thing I could do when I arrived was put my voice and my sound to it."

On the level of commitment he expressed upon rejoining the band:

Johan: "I said, 'If I'm going in with you guys, I'm putting everything I'm into aside,' so [there's] nothing else for me right now — it's only CANDLEMASS, and nothing else."

Johan: "I was so young the very first time, but I think we did that album very fast. I was young, and I was thinking, 'Wow, I'm going to do a record with the CANDLEMASS guys.' At that time, I was involved in my own band, but they wanted me to do the album, and it was a great thing for a young singer to do."

On Tony Iommi, who contributed a guest guitar solo on the new album's "Astorolus - The Great Octopus":

Johan: "BLACK SABBATH and especially Tony Iommi's guitars, they're one of the reasons that I'm into music. I've got them in my heart all the way. They've done so many amazing songs, and I'm pretty sure that they will last forever. They're one of the greatest bands in this genre that we've ever had, so they will always be with us, even if they [stop] going out on tour. They're great, and have always been."

Johan: "As long as we are having a good time and think, 'Well, we love this'... I can't tell you or give you a promise on that, but if I feel fine about it and they do, there'll be another record, but there's nothing in the planning stage right now."

"The Door To Doom" is CANDLEMASS's first full-length album since 2012's "Psalms For The Dead", which featured singer Robert Lowe, who left the band just days before its release. He was replaced by Mats Levén, who fronted the band until Längqvist rejoined in late 2018.