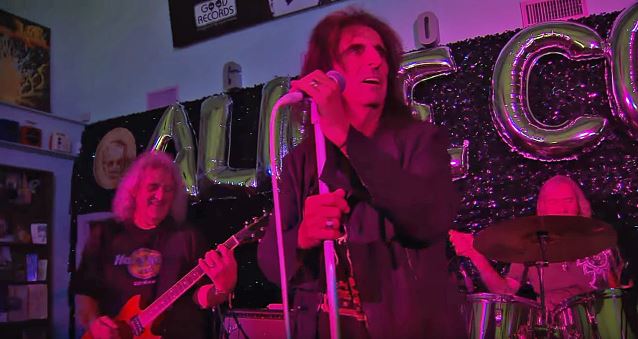 According to Rolling Stone, Alice Cooper will release a special seven-inch single containing two songs he sang last year with the surviving members of the original ALICE COOPER band. Due on Black Friday (November 25), "Live From the Astroturf" will feature performances of "I'm Eighteen" and "Is It My Body".

The set, which took place in October 2015 at Dallas music store Good Records, brought Cooper together onstage with bassist Dennis Dunaway, guitarist Michael Bruce and drummer Neal Smith for the first time since 2011, when they staged a pair of performances coinciding with their induction into the Rock And Roll Hall Of Fame as well as their appearance on Cooper's "Welcome 2 My Nightmare" LP. Guitarist Ryan Roxie, a member of Cooper's current band, stepped in for original member Glen Buxton, who died in 1997.

Dunaway was in Dallas to promote his memoir "Snakes! Guillotines! Electric Chairs!: My Adventures In The Alice Cooper Group", a book that the publisher says "takes readers into back rooms, behind brainstorming sessions, and into the most exclusive parties of the 1970s, revealing the talent, drama, and characters that drove two teenagers to create what would become America's highest-grossing act."

"Live From the Astroturf" will be available in a limited edition of 2,500 copies split into white, pink, black and pink and white vinyl. The pink-and-white version, limited to 100 copies, also features autographed prints from Cooper, Smith, Bruce and Dunaway. All editions also come in a shrink-wrapped gatefold foil board jacket with a sticker, individual number and six five-by-seven double-sided art prints on the inside sleeve.