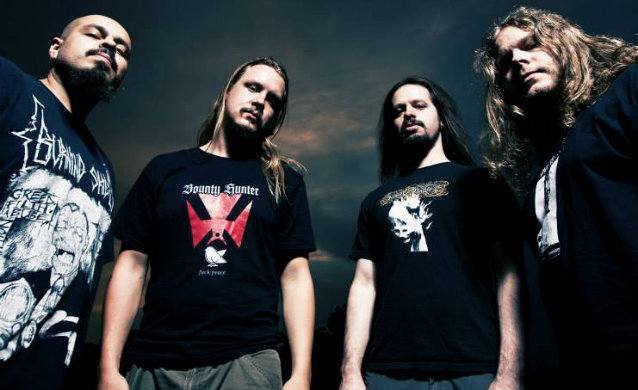 Technical death metallers ORIGIN will enter the studio later this month to begin recording their sixth album, "Omnipresent", for a summer release via Nuclear Blast Records.

Comments ORIGIN drummer John Longstreth: "We figured it would only make sense to return to Chapman Recording in Lenexa, Kansas and torture poor Robert Rebeck with our decompositions until he's able to (at risk of his own sanity) chip away at this mess of music and render it into a cohesive auditory masterpiece!

"As usual, expect all the classic ORIGIN devices and surprises that drives this band with every new album. Be ready for heaviness; this album is going to crush.

"Speaking of old and new, we are also very excited to mark the studio premier of Jason Keyser as ORIGIN's vocalist. Please send him your love, prayers, general good energy, meditation, money, etc. for we are surely sure to 'show him a good time' in the studio.

"ORIGIN records albums in a somewhat masochistic, chaotic, and senseless fashion. It's our best trick, and we need the best guy for our best trick, so that's why we have Jason. He's had two years of hard road work with the band and we know he’s the guy.

"For those that weren't aware, ORIGIN recorded 'Entity' as a trio without a proper vocalist, so we are very excited to have Jason in to do what a proper vocalist is supposed to do, and in the end leave less work for Paul [Ryan, guitar] and Mike [Flores, bass]!"