Commented ORANGE GOBLIN's Ben Ward: "The number of vastly successful bands on the Candlelight roster is testament to the quality and the hard work that everyone involved in the label has shown us and we are very excited about settling down in a new home after the label problems we have encountered in the past few years. It's an honour to be on such an esteemed label alongside bands that have inspired us since the bands inception. I believe that with the Candlelight team behind ORANGE GOBLIN we can concentrate on writing the best material of our career and continue to tour as much as possible, hopefully reaching parts of the world that ORANGE GOBLIN is yet to plunder! We have already started writing new material for a release in 2009 and OG fans, in fact metal fans in general, are gonna love how the new stuff is sounding. It's gonna be a hugh combination of SABBATH-inspired doom, filthy biker blues and more of the familiar booze-ridden GOBLIN groove."

ORANGE GOBLIN's latest CD, "Healing through Fire", was released in May 2007 through Sanctuary Records. The album was initially released as a CD with a bonus DVD featuring live footage from the band's headline show at London's Mean Fiddler in December 2006. 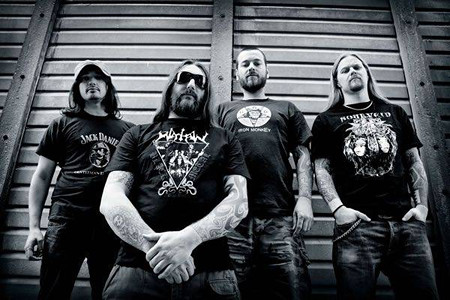