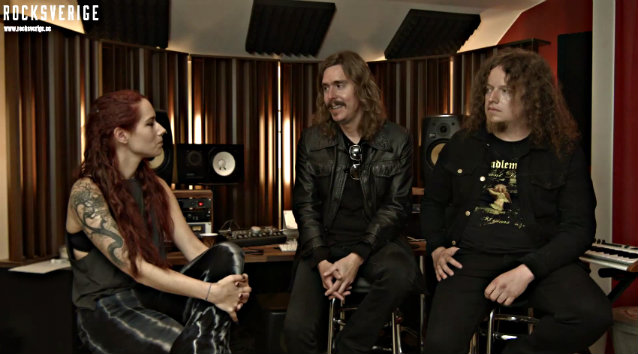 Earlier this month, Therés Stephansdotter of Rocksverige.se conducted an interview with Mikael Åkerfeldt and Fredrik Åkesson of Swedish progressive metallers OPETH in Stockholm. You can now watch the chat below.

Asked why they chose "Cusp Of Eternity" and "Eternal Rains Will Come" as the first two songs to be released from OPETH's eleventh studio album, "Pale Communion", Mikael replied: "We didn't. 'Cusp' was meant to be the single, and that's the label's decision, basically. They wanted some type of promotional track, so they picked that song. I guess it's the most straightforward type of rocking song on the record, I think. And it was fine with us. Me personally, I don't care what songs they're gonna promote as the single, so I was fine with that. And 'Eternal Rains', I think they put that out because it leaked earlier and we're trying to stop people from putting it up on YouTube and stuff like that, but, as you know, it's pretty difficult."

He added: "I personally don't like… If I could choose, we would not give the record out to any journalists or play it to anyone until it's released. But I'm obviously in the wrong."

"Pale Communion" is being released on August 26 via Roadrunner Records. The cover artwork was once again created by Travis Smith — with art direction by OPETH mainman Mikael Åkerfeldt. The CD was produced by Åkerfeldt and mixed by longtime collaborator and PORCUPINE TREE frontman/guitarist Steven Wilson.