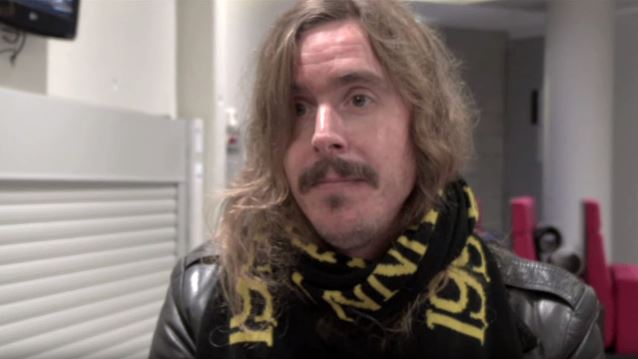 On October 14, Holland's FaceCulture conducted an interview with guitarist/vocalist Mikael Åkerfeldt of Swedish progressive metallers OPETH. You can now watch the chat in two parts below.

Speaking about his plans for the next few months, Mikael said: "I'm thinking of a project, actually — a thing that I want to do with a couple of friends of mine, that I will be writing for. And also, of course, [I will be working on the] new OPETH album, hopefully. I have written snippets of music that I haven't decided where they're gonna end up yet — or I haven't decided if they're gonna end up anywhere yet."

Pressed for more details on the new project, Mikael said: "Well, it will be… I can probably with confidence say that it will happen. But it will be in Swedish. I've asked one of my friends, I've e-mailed him asking him if he would be interested, because we did a song a long time ago together. Dan Swanö — he's a producer; he produced the first two OPETH records. So I asked him if he wants to play drums on this project. And another friend of mine from Stockholm, who is a classically trained piano player, but he plays bass and has a really cool vintage studio too, so I'm thinking of doing something like that. But I'm not sure how it's gonna end up. I want it to be not so progressive, really, but maybe more 'folky' and psychedelic, I think."

Asked why now is the right time for him to pursue this project, Mikael said: "Good question. I don't really know. I've just been thinking about… I've been thinking about it a lot. I can't get it out of my head. So it means something."

In a 2014 interview with Ultimate Guitar, Mikael spoke about the status of his long-rumored solo album. He said: "There's no need for me to do that because I'm really comfortable writing for OPETH. I can put pretty much anything into OPETH and there's no need for me to create some type of solo project in order to fulfill my dreams as a musician, because I put everything into OPETH. I said that a few years ago because I was interested in doing a singer/songwriter record because I loved that so much. Which obviously would need a full band. But it was also something I wanted to do just to see if I could produce a record from scratch on my own in my own studio. It was a bit of an experiment and to be honest not something I yearned for. I had a big mouth and then people thought it was actually gonna happen. 'When is it coming?' And I was like, 'Well, it's talk. Just talk.' But who knows? If I end up with a bunch of songs like that, maybe I'll put it out."