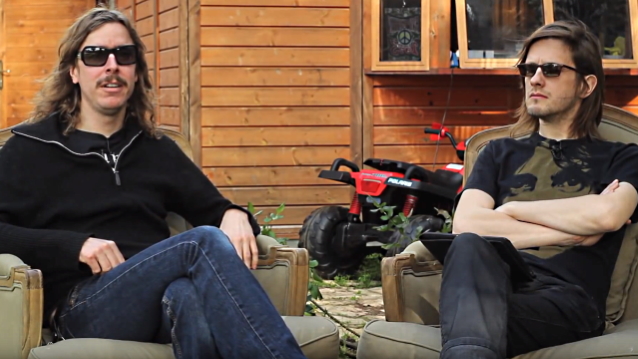 In a recent question-and-answer session posted on the YouTube channel of Nuclear Blast Records, OPETH mastermind Mikael Åkerfeldt was asked about the possibility of a second album from STORM CORROSION, his collaboration with PORCUPINE TREE's Steven Wilson.

"I had dinner with Steve yesterday, and we talked a little bit about it," Mikael said (see video below). "We always talk a little bit about it, if we're gonna do another one. But yeah, I think we'll try; at some point, we'll try. I can almost say a hundred percent that we will try, without really knowing — but just judging from how we talk about this project. That was a fun thing for both of us and a new thing for both of us. But the problem, when you have one record, is that there's a reference point. So it's likely that if we do another record, maybe there'll be another name for that project. And it's likely it will sound completely different.

"We wanna make another record, [and] if we do that, it has to be on the same premise as how we did the first one," he continued. "Nobody knows. There's no record label that knows. We don't even know if it's gonna work out and we don't know what we're doing, basically. I mean, that was almost written in real time and recorded in real time. We just had a riff. 'Okay, let's record that riff, that part, and then piece it together.' And then, in the end, it was, like, 'My God, this is strange. But we love it. What is it?'

"We had some common inspirations and common artists and bands that we said, 'Maybe around there, that's where we meet up and do something,'" Mikael added. "And it ended up sounding like nothing I can compare it to, to be honest. For good and worse, for fans. It's a weird record. And it sold a lot in the first couple of weeks, because Roadrunner picked that up. And I assume it sold a lot to fans of PORCUPINE TREE and Steven Wilson fans, who must have gone, 'What the hell is this?'

"I love that album — love it. But, yeah, we're gonna do something, I'm sure. But it's probably gonna be different."

Åkerfeldt and Wilson have been friends since the late '90s, when Wilson co-produced OPETH's revered "Blackwater Park" album. Over the years, they'd often spoken of working on a project together, but it wasn't until about a decade ago that they managed to make something happen, when Mikael flew over to visit Steven in the U.K. and they ended up in Wilson's home studio throwing ideas around. That visit was the nascence of a whole self-titled album, written and produced by the pair, and mixed by Wilson.

Issued in 2012, the self-titled debut album from STORM CORROSION sold 9,400 copies in the United States in its first week of release to debut at position No. 47 on The Billboard 200 chart. The CD also landed at No. 45 on the official U.K. chart.