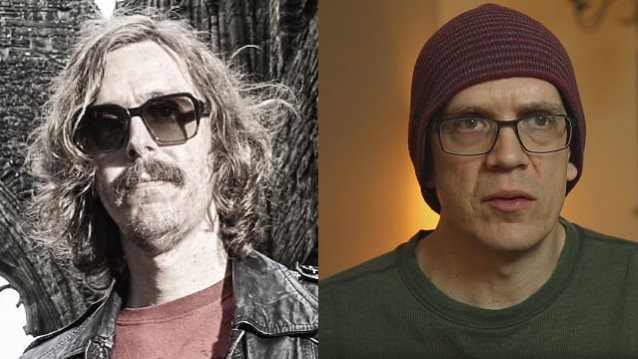 Vocalist/guitarist Mikael Åkerfeldt of Swedish progressive metallers OPETH was interviewed by Rock Hard publisher Holger Stratmann at this year's Rock Hard Festival, which was held June 2-4 in Gelsenkirchen, Germany. You can now watch the chat in four parts below.

When asked about his proposed project with Canadian musician/producer Devin Townsend, Mikael said: "Well, actually, if I say anything about it, people are gonna be expecting something to be released. Some of these… I don't know how many projects I've been in, and all of them have been talked about when you're drunk. I had a band with Jeff Loomis [ex-NEVERMORE], from now ARCH ENEMY. [We were] like, 'We're gonna have a band.' And a band with Brent [Hinds] from MASTODON. And I was gonna have a band with Yngwie Malmsteen, even if I never met him. But [there was] talk [of] a lot of shit — a lot of shit. But this one, and since [Devin] already mentioned it, yeah, I talked to him about doing something. Not [just] me and him… If it happens, which it may well not do, it will be like a band of musicians."

Åkerfeldt added: "The idea for this — again, if this happens — is to have a band consisting of lead singers. So the vocals first and instruments second, because that's been gone missing in music, I think, now. So people that are comfortable singing lead vocals. And then if they are a bass player or a drummer, that's great. But the singer is the most important thing, that they have a lead-vocal-type voice, if you know what I mean. So the band, if it happens, it's not gonna be anything big — [we'll] just do a record for the fun, if we get there, and, like I said, focus on singing and harmony vocals. Like, one takes the lead and the other guys are singing harmonies. Because I love vocals and I've been missing that in the rock scene."

OPETH's twelfth album, "Sorceress", was released last September. For the band's first effort for Nuclear Blast via OPETH's imprint label Moderbolaget Records, the group returned to Rockfield Studios in Wales, also home to pivotal releases from QUEEN, RUSH and JUDAS PRIEST, where the Swedes had tracked "Pale Communion" in 2014 with Tom Dalgety.