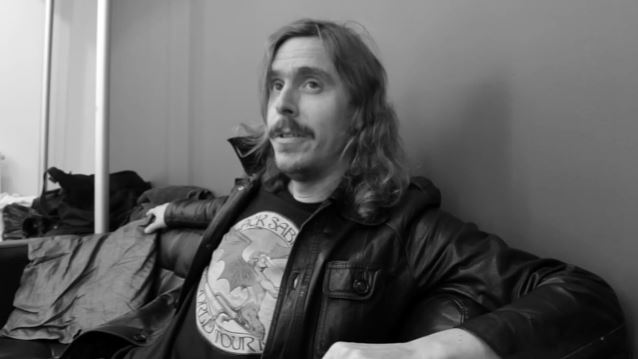 On October 11, guitarist/vocalist Mikael Åkerfeldt of Swedish progressive metallers OPETH was interviewed by Roadrunner at Roundhouse in London, England. You can now watch the chat below.

Asked what impact the venue's location has on an OPETH performance, Mikael said: "If you're gonna put it to extremes, if you're playing in a Mexican restaurant, which we have, with the menus and stuff and people eating tacos while watching the show, it probably generates a different atmosphere than what we're gonna have here tonight. But we don't mind; we'll play anywhere. The worst types of venues for me are, actually, the sterile new ones. They might sound good and stuff like that, but it feels like a warehouse. I'm not gonna say I don't enjoy playing those places — it's alright — but I prefer places with a bit of history."

OPETH will celebrate its landmark 25th anniversary as a band next year with a very special event at the legendary London Palladium on October 18, 2015. After being the heaviest band to play the Royal Albert Hall in 2010, they will no doubt be the heaviest band to also play the Palladium. The unique show, dubbed "An Evening With OPETH", will feature two sets from the progressive Swedes, including 2005's much-lauded "Ghost Reveries" album in its entirety (which in turn is celebrating its 10th anniversary), plus a second set of classics from their 25-year career.