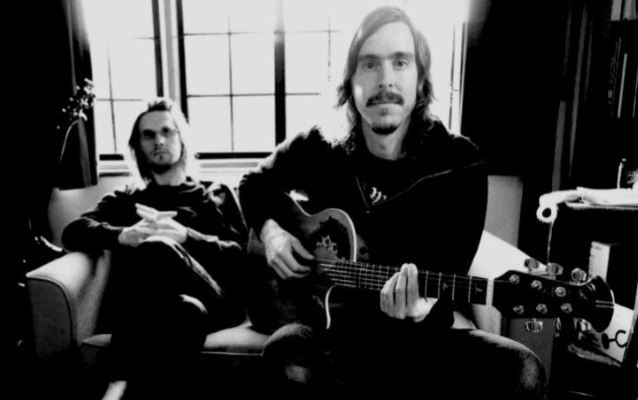 Journalist and musician Barbara Caserta of Italy's Linearock recently conducted an interview with Mikael Åkerfeldt and Fredrik Åkesson of Swedish progressive metallers OPETH. You can now watch the chat below.

Asked if there are any plans to release a second album from STORM CORROSION (pictured), the collaboration between Åkerfeldt and PORCUPINE TREE's Steven Wilson, Mikael said: "Well, we talked about doing another [album] a couple of times, but I think it has to be a timing thing, because I'm busy and he's busy. It has to be something natural. I'd like to do another record under the same premises as we did the first one, where there was no expectations and nobody really knew that we were doing it, not even the record labels and stuff like that. So we just did this album, just doing music that we… One of our connective points when it comes to music that we like but that we haven't really experimented too much with was that type of ambient, kind of droney sound, almost 'sountrack-y' music. But I'm not sure if that's our style. So I don't know how it's gonna look in the future. But if we do something, it has to be, like I said, under the same premises as we did the first record."

Mikael also spoke about the songwriting process for the first STORM CORROSION album, telling Linearock: "It was just a heat-of-the-moment thing. I can't remember exactly how it started. I was there [in England] visiting [Steven] or something, and we were just hanging out, watching TV, and it's, like', 'Let's do a song.' And we did one of the songs there, and it's, like, 'This is pretty cool. We can do another song.' So that's how it started and ended. There was never any pressure. It was, like, 'When you come down next time, we can do another track.' And also one of the things with STORM CORROSION was that everything had to be created from scratch — no rehashed old ideas — and you couldn't write on your own. We each could sit in the same room and write and just let the song grow from nothing in real time. Everything was written on the spot apart from one little thing that was an idea that I had that I sent to Steven. 'How about this? Do you like this?' And he said, 'I love it.' 'OK, let's break the rules' [Laughs] 'for a little while.'"

Asked if former DREAM THEATER and current THE WINERY DOGS drummer Mike Portnoy was ever involved during any of the STORM CORROSION sessions, Mikael said: "No, he was never involved. It was just talks, basically. This whole project was surrounded by a lot of talk — the supergroup idea, Portnoy, me and Steve, doing a record together, which, I guess, we considered it for a little while, but then when we had this first song written, first and foremost, it didn't any drums; it had a cymbal. And it felt like… How are we gonna present this to Mike? First and foremost, do we need a drummer? And we came to the conclusion that maybe it will cool to do a record that doesn't depend on drums. Because usually that's the skeleton, that's the foundation of songs in rock music — a drum beat — and we kind of turned it around and wrote music that didn't depend on drums. Even if it has a little bit of drums, which ended up being played by Gavin Harrison, who plays with PORCUPINE TREE, it was still not something that, I think, Mike would have accepted. You don't bring in a drummer of his caliber and ask him to play a cymbal."

"Pale Communion" was released on August 26 via Roadrunner Records. The cover artwork was once again created by Travis Smith — with art direction by Åkerfeldt.