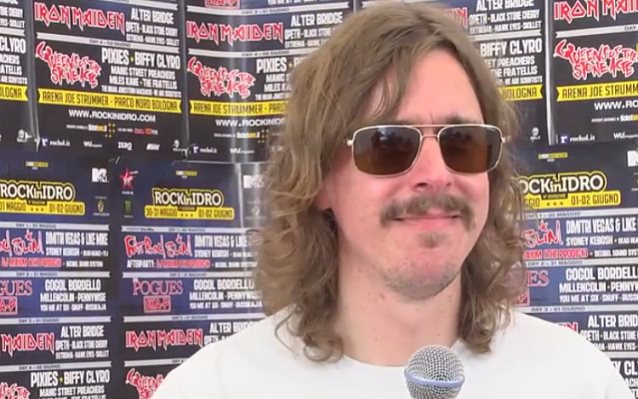 On June 1, guitarist/vocalist Mikael Åkerfeldt of Swedish progressive metallers OPETH was interviewed at the Rock In Idro festival in Bologna, Italy. You can now watch the chat below.

OPETH's highly anticipated eleventh studio album, "Pale Communion", will be released on August 26 via Roadrunner Records. The cover artwork was once again created by Travis Smith — with art direction by OPETH guitarist/vocalist Mikael Åkerfeldt — and can be seen below.

"Pale Communion", which was produced by Åkerfeldt and mixed by longtime collaborator and PORCUPINE TREE frontman/guitarist Steven Wilson, will be heralded by the lead single "Cusp Of Eternity" and available for pre-order starting Tuesday, June 3. Pre-orders for "Pale Communion" made via the iTunes Store will receive an instant download of "Cusp Of Eternity" as well as a second album track, to be released on July 15, with multiple configurations also available via both the Roadrunner Records webstore and O Merch.

Mikael added in a separate interview with Metal Assault: "['Pale Communion' is] the next album, so I guess it's closer to ['Heritage'] than, say, the first album. But I'd like to think there's an upgraded sound, and by that I don't mean a modern sound. We were looking at some of the late '70s and early '80s production, and that's what we were going for sound-wise and it's one of the reasons why we ended up recording at Rockfield Studios in Wales, which is a legendary studio where many of our favorite bands recorded. So, musically, I guess you could say it's similar to 'Heritage', but I'd like to think it's more hard rock and metal sounding. We also have something new that we didn't have before in certain songs. I don't really know what it is, which I like. I like to either recognize our sound or to hear something completely new, and I think we have both on the new album."

Asked if he thinks if it would be fair to say that people who liked "Heritage" will like this new album as much as, or even more than, the last OPETH CD, Mikael said: "Yeah, I hope so. I hope everybody will like it, of course. I think it's probably a bit easier to get into because it's a bit more melodic. There's definitely more attention to melodies and I wouldn't say it's an easy-listening album at all, but there's more melody than ever before, not just 'Heritage'. I'm hoping that people who liked 'Heritage' will like this one too and also fans who liked the old shit will hopefully like this one as well, and may be some new fans. You never know."