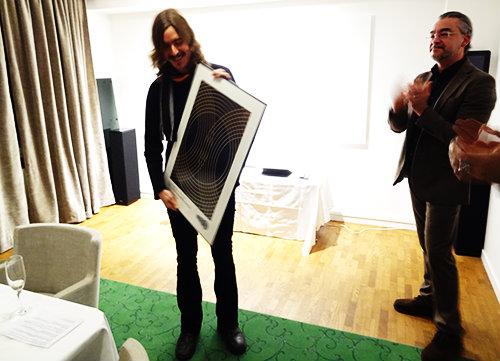 Every year SKAP awards scholarships and prizes to celebrate Swedish creativity across all musical genres. The awards ceremony takes place in tandem with SKAP's annual spring party which is organized with the composers in mind and creativity as the main focus.

This year Mikael Åkerfeldt of Swedish progressive metallers OPETH was awarded an exclusive scholarship for his services to the Swedish and international music scene. Mikael was presented with the scholarship and diploma at an intimate event in the south side of Stockholm on December 9.

"I'm quite honored to receive this," said Mikael. "Apparently, you can't apply for this scholarship, a board of legendary musicians decide that you're the right person for this award.

"I had never even heard of SKAP before they contacted me. I'm happy and surprised there's some focus on heavy Swedish music and genuinely chuffed that they focused in on me.

"Through time I've been handed some awards and whatnot, but this one resonates more in me personally. No glitz and glamour, just some appreciation for what we and I do musically. It's well appreciated!"

OPETH spent the last few months of 2013 putting the finishing touches on the writing and recording process for its next studio effort, which will be released sometime next year.