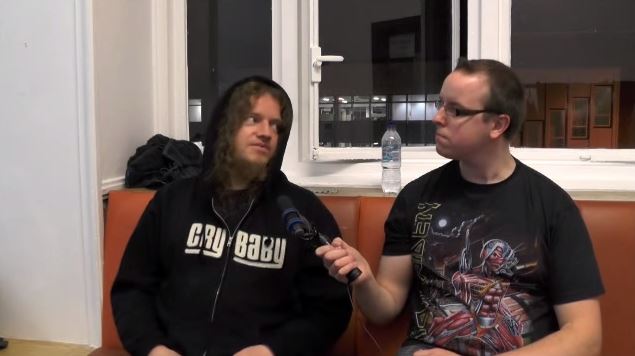 GetYourRockOut recently conducted an interview with guitarist Fredrik Åkesson of Swedish progressive metallers OPETH. You can now watch the chat below. A couple of excerpts follow (transcribed by BLABBERMOUTH.NET).

On the reaction to OPETH's latest album, "Pale Communion":

Fredrik: "I don't read everything on the Internet, so there's probably a lot of shit throwing on there, as always, but it feels like the majority of OPETH fans get the idea. And still, the death metal part is a huge part of the OPETH sound. In the setlist, we try to play everything from every album, and that's what we do in this set; we play [songs] from every album, apart from the first [one], 'Orchid'. So, I think, if you're an old-school fan, you definitely get your dose of the death metal era as well. For the future, we don't know what's gonna happen. [There] might be an extremely brutal album ahead in the future."

On whether OPETH will take the "Pale Communion" sound even further on the next album:

Fredrik: "Maybe. It's so hard to say. It would only be speculations, to talk about the future, because I think we like to be a bit unpredicatable in that sense. And we don't know what's gonna happen. It's kind of exciting to have it like that. But I think, in a way, 'Heritage' and the last album, 'Pale Communion', is probably a continuation of 'Heritage' in a way. It's more late '70s/early '80s in the sound aspect. The drums are brought up a bit more, and I think this album has a bit more melody to it, and it's probably a bit easier to digest, maybe."