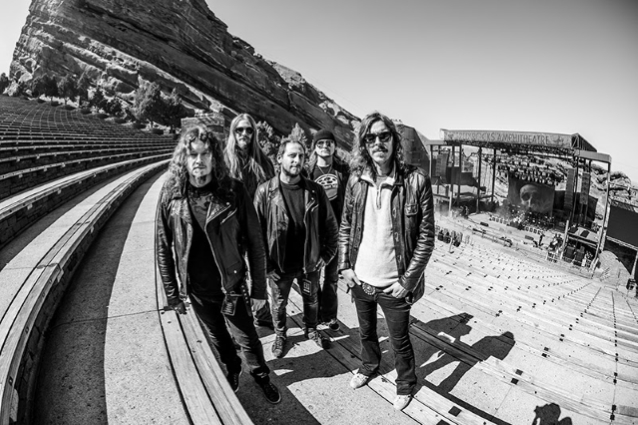 OPETH, in collaboration with famed Swedish Heavy MetAle, has announced the release of three types of beer to be released simultaneous this November 10. All three beers are brewed at the Nääs Gårdsbryggeri brewery in southern Östergötland.

* Heritage Pilsner is a brave and beautiful beer with light tones of bittersweet hops. A tasteful and timeless brew inspired by the band's 2011 "Heritage" album.

* Sorceress Session IPA is bitter, strong and full of hops. Yet, its harsh body contains a hint of something sweet. And just like OPETH's twelfth full-length 2016 album it's an adventure where different notes and shifting tones create an orchestra with well-balanced flavors.
* Garden Of The Titans Red Ale is a unique red brew filled with American hops to commemorate OPETH's "Garden Of The Titans" live album, set for worldwide release this November 2 through Moderbolaget/Nuclear Blast Entertainment. "Garden Of The Titans" was recorded on May 11 last year at the world-famous Red Rocks Amphitheatre in Denver, Colorado which provided the perfect inspiration for this tasteful American red ale.

Heavy MetAle's Michael Lindahl comments: "I'm incredibly proud of this collaboration with OPETH. Our mission is to make brews complete by pairing hops and malt with metal music — a perfect match for rock bands, beer lovers and heavy metal folks alike. Every Heavy MetAle beer should be enjoyed together with brilliant music!"

OPETH's Mikael Åkerfeldt comments: "From drinking random peoples; stale, leftover beers during the Stockholm nightlife of the early '90s to manufacturing our very own beer together with Heavy MetAle might be seen as a massive leap of success. And it is! At least for the beer connoisseurs that we have become. We sincerely hope that everyone that uncaps a bottle of OPETH beer thoroughly enjoys its flavour. Fan or not, it doesn't matter. A great beer remains a great beer on the taste buds of any devoted fan of this nectar from the Gods."

The first beers will be made available at Stockholm's famed Zum Franziskaner beerhalle on Saturday, November 10 starting 3 p.m. with members of OPETH there to celebrate. Entry is free for all.