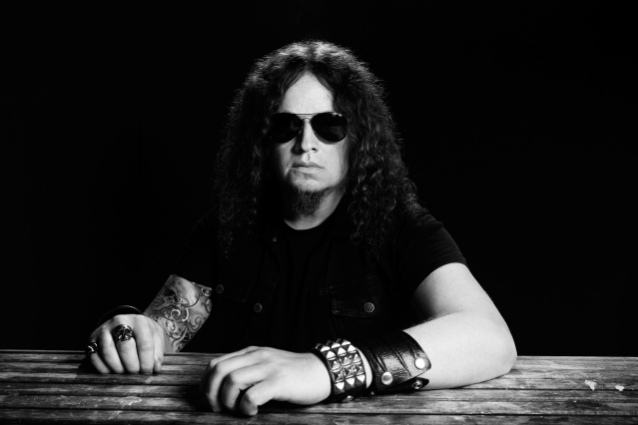 OPETH guitarist Fredrik Åkesson recently spoke with Andrew McKaysmith of the "Scars And Guitars" podcast. The full conversation can be streamed below. A few excerpts follow (as transcribed by BLABBERMOUTH.NET).

On the group's new album, "In Cauda Venenum":

Fredrik: "The goal with this album was to make it as epic as possible. The fact that Mikael [Åkerfeldt, vocals] wrote the first version in Swedish, that was actually a driving force for him to finish off the songs, basically. I think it made it more interesting for him — or challenging, perhaps — to write the lyrics in Swedish. We were really happy with it. I think we really went the extra mile when it came to recording, when it comes to choosing the right tones, amps, guitars, et cetera. Also the fact that we did rehearse properly before we entered the studio. We hadn't done that since the 'Watershed' album. I've always been pushing for that, and this time around, we did it. I think that was a great investment, because playing the songs together, they sink in better in your muscle memory. [There] wasn't really any question marks about anything — any parts — when we're in the actual studio. We spent a lot of time picking the right amps [and] had so many guitars in the studio, it was insane... It was fun, and we're happy with the result."

On whether the band considers how their music will be received:

Fredrik: "Mikael, who writes the majority of the stuff, doesn't really care. He's very artistic. He likes his artistic freedom, and so does the band. The label can't tell us what to do. They have absolutely no input whatsoever when it comes to the creative process. I think it's always been like that with OPETH. I think if we did 'Blackwater Park' all over and over again [in] different versions, it would stagnate. It would get boring. We still enjoy playing that era live, definitely — it's the foundation of OPETH, and maybe one of these days, Mikael will bring out the growls again. Who knows? His growl is actually better than ever when we play now. It's very guttural. It's more mean-sounding than in a long time, I think. We still think it's really fun to play those classics live, and we will still continue with that."

On whether the band plans to perform the new album live in its entirety:

Fredrik: "I think everybody [in the band] would kind of like that idea. What we've been talking about right now, at least, we play four songs from it. It's difficult to pick the ones. We'll see. We haven't really decided yet... Right now, we've been pretty much playing 'The Garden Of The Titans' kind of setlist when we played the summer festivals, and we're going to change that completely. Maybe not 'Deliverance' — we always play 'Deliverance' — but we'll see. We're definitely going to try to make as interesting a set list as possible, but I like the idea of playing the entire album."

On his own performance on the album:

Fredrik: "I'm a metalhead, of course, since the beginning, and I still play a lot of that stuff, but I also appreciate players with great tone — [Eric] Clapton, Jeff Beck, Billy Gibbons. The list goes on and on. I think tone is very important, and if you're not a fusion/jazz player and know all the theory, you can depend on your tone, and it makes it easier for you. 'Lovelorn Crime' was pretty funny. When Mikael asked me to play that solo, he told me, 'I want this solo to be the one people remember you for when you die.' 'Okay — thanks for the pressure, buddy.' I don't know if that happens, but it came out good, I think. It's different. I try to make the solos different from each other. Some of the solos on the album, like 'Heart In Hand', it's more wild [and] shreddy. Also 'Continuum', I wanted to make a very aggressive type of solo."

On whether he plans to release a solo album:

Fredrik: "I do have a lot of stuff, and it's always been a plan, but there's always something popping up. When we were done with the new OPETH album, I got a call from Biff Byford from SAXON. He wanted me to play guitar on his solo album, and we started writing songs together, so I wrote two tracks, which is more progressive metal type of tracks, and I did an arrangement of 'Scarborough Fair', which SIMON & GARFUNKEL is most famous [for]. He wanted more of a heavy version of that. [There have been] millions of versions of that track, but he's actually from that area, so it has some deeper meaning to him. I spent one month in northern England [and] did all the guitars for his solo album. I was very involved with that — almost co-producing a little bit, I would say... I just got a new studio set up here, and [soon], I will try to start recording stuff and see where it goes. I don't want to promise anything, but it's always the goal to do some kind of solo album. Even Mikael told me I should do that."

OPETH's 13th album, "In Cauda Venenum" will be released on September 27 via Moderbolaget / Nuclear Blast Entertainment.