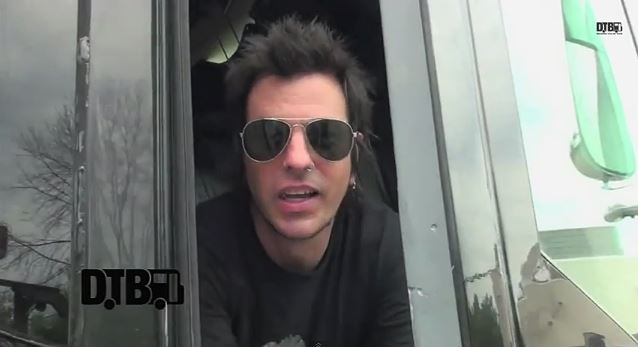 Digital Tour Bus, which gives fans "an all-access pass" to the tour buses that their favorite bands travel in, has posted its latest "Bus Invaders" episode, focusing on SKID ROW. The six-minute clip, which was filmed on July 12 in Arlington Heights, Ilinois, can be seen below.

"Rise Of The Damnation Army - United World Rebellion: Chapter Two", the new EP from the current lineup of SKID ROW — Johnny Solinger (vocals), Scotti Hill (guitar), Rachel Bolan (bass), Dave "Snake" Sabo (guitar) and Rob Hammersmith (drums) — sold around 1,300 copies in the United States in its first week of release. The CD, which came out on August 5 via Megaforce Records, contains covers of QUEEN and AEROSMITH classics as bonus tracks.