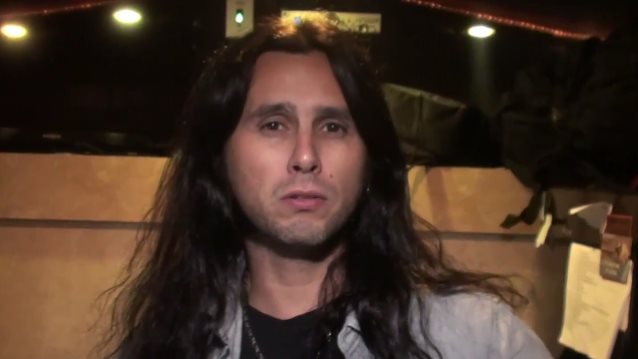 Greek guitar virtuoso Gus G., well known in rock and metal circles for his work as Ozzy Osbourne's guitarist and as leader of his own band FIREWIND, is featured in the latest episode of Digital Tour Bus's "Bus Invaders", which takes you inside the touring vehicle of one of today's top touring acts. The footage was shot on September 24, 2016 in Berwyn, Illinois during Gus's "Operation Domination" U.S. co-headlining tour with Angel Vivaldi.

FIREWIND's eighth studio album, "Immortals", will be released on January 20 via the band's longtime label partner Century Media Records in Europe. The disc marks the first time FIREWIND used an outside co-producer, having worked with Dennis Ward (UNISONIC, PINK CREAM 69), who not only engineered, mixed and mastered the album, but also co-wrote it together with Gus G.

"Immortals" is FIREWIND's first release with singer Henning Basse (METALIUM, SONS OF SEASONS), who previously toured with the band on various continents in 2007 and was most recently the singer in Gus's solo touring group.

Gus's latest solo album, "Brand New Revolution", was released in Europe in July 2015 via Century Media. The CD was made available through Century Media in Australia and South America, Dismanic/eOne in North America and King Records in Japan.