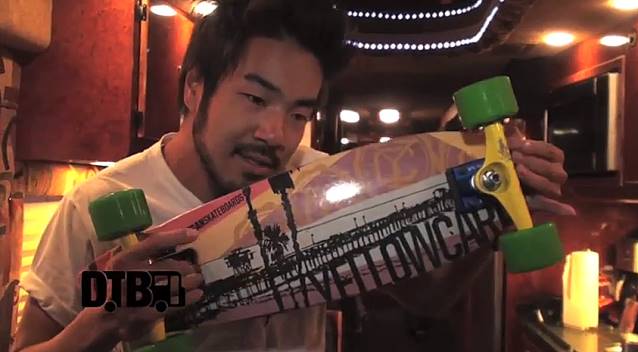 Digital Tour Bus, which gives fans "an all-access pass" to the tour buses that their favorite bands travel in, has posted its latest episode, focusing on the Japanese quintet CROSSFAITH — featuring Kenta Koie (vocals), Terufumi Tamano (programming), Kazuki Takemura (guitar), Hiroki Ikegawa (bass) and Tatsuya Amano (drums). The three-minute clip, which was filmed on July 3, 2013 in Noblesville, Indiana during this past summer's Vans Warped Tour, can be seen below.

CROSSFAITH's new album, "Apocalyze", sold around 1,500 copies in the United States in its first week of release. The CD, which was released in the United States and Canada through The End Records on September 3, was produced by Machine (LAMB OF GOD, EVERY TIME I DIE, FOUR YEAR STRONG), who also helmed the group’s "Zion" EP.

CROSSFAITH combines metal, hardcore, samples and electronica to create groundbreaking music that transcends genres. Their 2009 debut album, "The Artificial Theory For The Dramatic Beauty" (Zestone Records), served as the catalyst in Japan; distinguishing the group as a true force and propelling them to the top of their game.