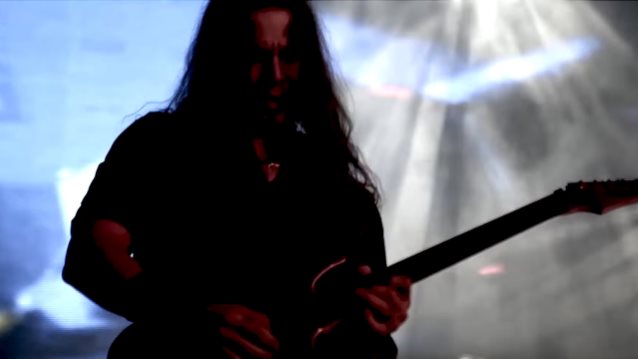 Behind-the-scenes video footage from MEGADETH's October 2016 concerts in Worcester, Massachusetts; Uncasville, Connecticut and Newark, New Jersey can be seen below. The clips were filmed and uploaded by MEGADETH guitarist Kiko Loureiro, who officially joined the group in early 2015.

Kiko wrote on his YouTube channel: "With these videos, I wanna show you a little bit of life on the road, of what it's like living the dream of playing around the globe in a legendary band with great people and killer musicians.

"Not only I have the chance to play in amazing cities, but also we have the time to visit, enjoy and learn a lot about other cultures.

"Isn't it the perfect job?"

On February 12, MEGADETH was honored with a Grammy in the "Best Metal Performance" category for its 2016 album, "Dystopia".

In an interview with Jump Metal, Loureiro was asked what it has been like joining MEGADETH as the replacement for Chris Broderick. He responded: "Yeah, it has been great to work with [Dave] Mustaine, [David] Ellefson [MEGADETH bassist] and Chris Adler [LAMB OF GOD drummer, who appeared on the new MEGADETH CD and played select shows with the group]... It's amazing [to be part of MEGADETH]. It's a great opportunity, it's a great band, great guys, great music. I'm very honored to be in MEGADETH and that the guys have chosen me to be the guitar player. It's a band that always had a great spot for guitar players. They always had great guitar players since the beginning: Chris Poland, Marty Friedman, Chris Broderick... some great guitar players. So I'm honored to be part of this legacy."