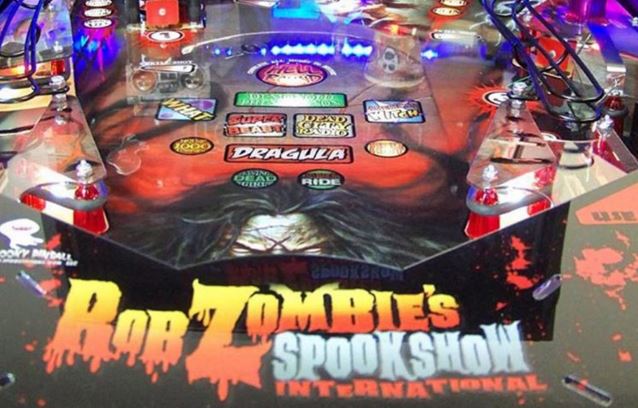 A gameplay trailer for boutique flipper game maker Spooky Pinball LLC's upcoming Rob Zombie's Spookshow International pinball machine is available below. The seven-minute clip features the music of Rob Zombie, a tour of the playfield and review of the pin's cabinet graphics.

Rob Zombie's Spookshow International will begin shipping in February. The production run will be limited to 300 and will include 10 classic Zombie songs and custom speech by the artist himself. "The Devil's Rejects" actor Sid Haig and Zombie's wife, Sheri Moon Zombie, have also lent their voices to the machine. Spooky has outsourced artistic talent to Alex Horley and toy design to Back Alley Creations. There are also references to Zombie's films, such as Captain Spaulding's fried chicken and gas station, as part of the pinball machine's landscape.

Rob Zombie's Spookshow International is powered by an all-in-one board. It also includes a "family mode" option, which edits harsh language and some nudity from the pin's animation display.

Highlights of the pinball machine: