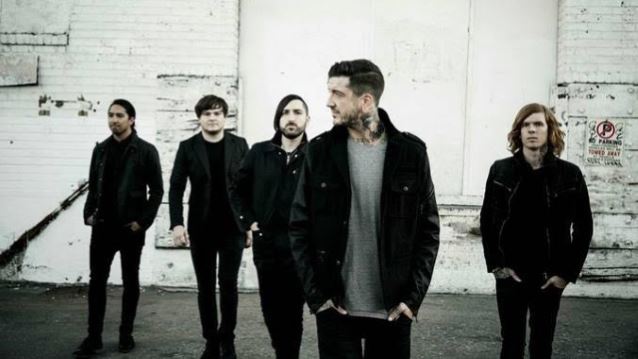 Orange County, California-based rock band OF MICE & MEN and Rise Records have announced the release of "The Full Circle Story", a five-part documentary series that will stream on the group's web site every Monday beginning today. "The Full Circle Story" will only be viewable to those who sign up for OF MICE & MEN's all-new fan club, The Ampersand. A trailer for the series can be viewed below.

Directed by Jon Stone, "The Full Circle Story" was shot over the course of the past year, following the band as they traveled around the world performing sold-out shows for an international fanbase whose members number in the millions. Along the way, the quintet (vocalist Austin Carlile, guitarist Alan Ashby, drummer Valentino Arteaga, vocalist/bassist Aaron Pauley and guitarist Phil Manansala) released "Restoring Force", which hit No. 4 on The Billboard 200 album chart and No. 1 on both the Billboard Top Independent and Top Rock Albums charts, shared stages with artists such as METALLICA, LINKIN PARK and QUEENS OF THE STONE AGE, blanketed rock radio airwaves, garnered critical acclaim and amassed over twenty million YouTube views and close to five million social media followers on the strength of an blistering sound and live show.

"The Full Circle Story" places fans on both sides of the stage: capturing electrifying concert footage, then going behind the scenes for a rare glimpse at the inner workings of the band that's being hailed as "the leaders of metal's new revolution." Stone previously worked with OF MICE & MEN on last year's "Identity Disorder" video.

"'The Full Circle Story' offers the viewer an incredibly unique perspective—our perspective," says Pauley. "The five-part series takes the viewer on a wild international journey through our past few years, as seen through our eyes. It also showcases some of our favorite moments since the release of 'Restoring Force', complete with live footage from shows played around the world and interviews from the band. With the help of our friend Jon Stone, 'The Full Circle Story' captures what it's like to be in OF MICE & MEN, and we can't wait to share that experience with our fans in a way we never have before."

OF MICE & MEN will spend the summer on a 34-city tour with SLIPKNOT and MARILYN MANSON.

"It's been an extreme past half year of broken ribs, head, hips, and tour dates," says Carlile. "After initial surgeries, followed by more medical exams and tests, and physical therapy multiple times a week, the last few months have been a real hurdle for me mentally and physically. Now that we've reached the other side, I'm ready to get the relentless machine that is OF MICE & MEN back on track. It will start in March with two and a half months in the studio recording our new album. Then a European festival run (taking in Slamdunk and Rock Am Ring/Rock Im Park). Next up we will be opening for SLIPKNOT and MARILYN MANSON all summer long in America, playing various American rock radio festivals along the way, including Chicago Open Air festival.

"We hope our new documentary series, 'The Full Circle Story', will hold you over for now. We put a lot of time and energy into it and hope you enjoy watching part of our Artemis journey and just how it all came Full Circle. See you on the road. Tell everyone you know, OF MICE & MEN is back."