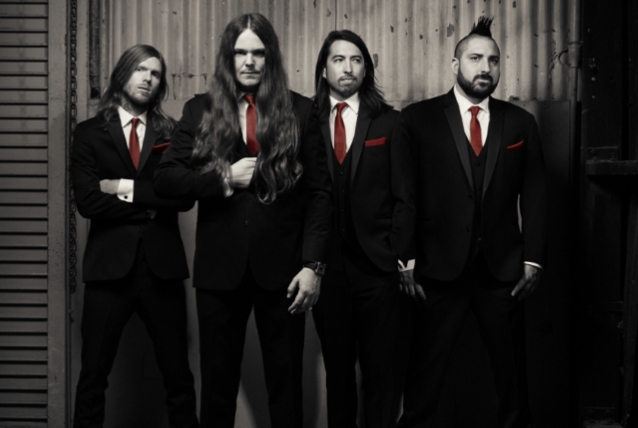 OF MICE & MEN has released the official music video for a new song called "Mushroom Cloud". Check it out below.

Commented singer/bassist Aaron Pauley: "I was pretty young when I became aware of the danger of spending too much time in my own head. My mind has never been a safe place for me to retreat to, and it's something I have to consciously deal with on a daily basis. 'Mushroom Cloud' is our visceral representation of how it feels to be trapped, how it feels to be cut down by your own inner voice, how it feels to have nowhere to hide, and how it feels to be someone with a mind that's as dangerous to themselves as the aftermath of an atomic weapon."

OF MICE & MEN has been in the studio working on new material with producer Josh Wilbur.

The band's previously released single "How To Survive" marked the first taste of new music from the Southern California quartet since last year's much-praised "Defy" album.

OF MICE & MEN is currently supporting BEARTOOTH and will play a handful of headline shows as well.

Last month, Pauley was "cleared" to return to the road after undergoing surgery in early April to have some precancerous tissue removed.

OF MICE & MEN pulled out of the first six shows of its U.S. tour with BEARTOOTH so that Pauley could have enough time to recover from his surgery.

This past March, OF MICE & MEN scrapped its concert in Hartford, Connecticut after Pauley was taken ill. That medical issue was apparently unrelated to his most recent surgery.