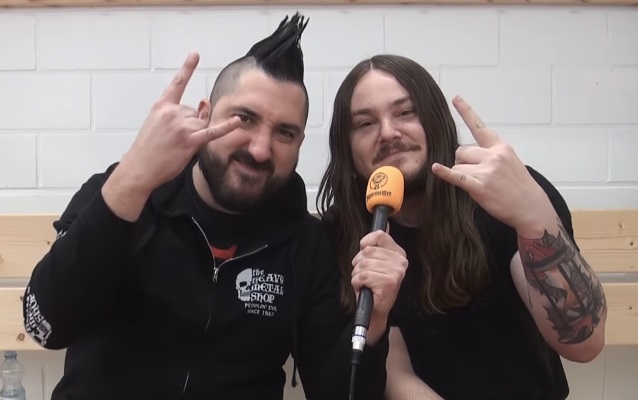 Finland's Kaaos TV conducted an interview with OF MICE & MEN members Aaron Pauley (bass, vocals) and David Valentino Arteaga (drums) before the band's November 14 concert in Helsinki, Finland with IN FLAMES and FIVE FINGER DEATH PUNCH. You can now watch the chat below, A couple of excerpts follow (transcribed by BLABBERMOUTH.NET).

On the songwriting process for OF MICE & MEN's upcoming album, "Defy", which marks the band's first full-length release without vocalist Austin Carlile:

Aaron: "The only real difference was, in the past, [Austin] and I would work on vocals together and stuff, and for writing the music, everything else was the same as it's been before, which, for us, felt very good to kind of go back in the studio… That's a really good question — we get asked that a lot: how different was it? And for us, it didn't really feel that much different. I think when it came to doing lyrics and vocals, instead of me bouncing ideas off of Austin, I would bounce ideas off of Tino or off of Alan [Ashby, guitar] or off of Phil [Manansala, guitar]. So kind of the whole way that we've always done things is very group-oriented. And with regards to the music, us being the four musicians that played instruments, that didn't change and the way that we had crafted music and made records and demos in the past didn't change. It was just the vocals and the lyrics — and even that didn't really change other than it wasn't me bouncing ideas off of Austin, it was me bouncing ideas off of Tino and Alan, Phil and our producer. So it felt very similar — probably more similar than it felt different."

On whether he tried to challenge himself with his vocal performance on "Defy":

Aaron: "I don't think that it was so much challenging, I think it was more about trying to kind of settle into myself more. I think sometimes, especially in terms of vocals, it's really easy to say, 'I'm gonna challenge myself with this song,' and you can end up doing something that sounds great one time, and then you get on tour and you play for a month and you're like, 'Man, I should not have hit that note,' or something. But for me personally, it was all just about doing what was best for the song. I didn't really think about vocals… anything beyond how it fit in terms of the song. 'Cause for us, the song is everything — it's not the instruments, it's not the vocals or the lyrics; it's the culmination of everything. So, for me, it was just about figuring out what was best for the song. And working with [producer] Howard Benson was amazing, because he pushed me to push myself, but never beyond what I felt comfortable with and never beyond what was manageable live or anything like that. And also, it got to be to where I feel like it's a very true record — for me, the way I sing, the way I scream, it's a very honest, true record and a true representation of that."

"Defy" will be released on January 19, 2018 via Rise Records. The disc was recorded with Grammy-nominated producer Howard Benson (IN FLAMES, ALL THAT REMAINS), mixed by Grammy winner Chris Lord-Alge (DEFTONES, MUSE) and mastered by Chris Athens (DRAKE, OZZY OSBOURNE).

Carlile left OF MICE & MEN due to his ongoing battle with Marfan syndrome, a rare genetic disorder that afflicts the connective tissue holding the body's cells, organs and tissue together.

Carlile originally exited OF MICE & MEN in 2010 after his doctor forbade him from touring to undergo heart surgery tied to complications with Marfan Syndrome. He returned in 2011, but his ailments didn't cease, forcing him to leave the band for the second, and presumably final, time at the end of last year.

An OF MICE & MEN documentary called "Unbreakable" was released on October 13. The short film, which was directed by Johann Ramos, follows the band across multiple continents on their tour earlier this year.