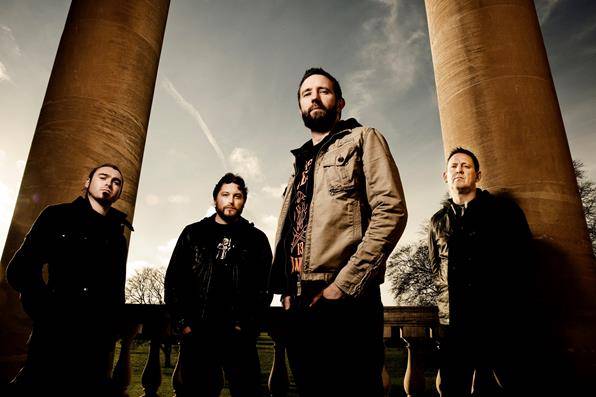 As its tenth anniversary looms over the horizon, British post-punk band OCTOBER FILE is currently recording its fourth album at the acclaimed Orgone Studios with producer Jamie Gomez, known for his work with CATHEDRAL, ULVER, ALTAR OF PLAGUES and ELECTRIC WIZARD. Entitled "The Application Of Loneliness, Ignorance, Misery, Love And Despair - An Introspective Of The Human Condition", it is a concept effort based on the contents of the aforementioned title. Taking a look at the human state, what we see and what we feel in certain situations, and how we look at things totally uniquely. A May 26 release via Candlelight Records is expected.

Anger and belief. Power and persistence. OCTOBER FILE have earned a formidable reputation as one of the U.K.'s heaviest and most intensely original bands over their eventful career. This four-man post-punk hardcore crew, formed in 2003 by guitarist Matt Lerwill and bassist Steve Beatty, have doggedly redefined what it means to convey ferocity and fury through the art of riffs, rhythms and incendiary, politically-charged lyrics, amassing a substantial fan base from across the rock, punk and metal spectrum and garnering countless effusive and ecstatic reviews from all corners of the rock and metal media.

Inspired by a wide range of influences, from post-punk heroes like KILLING JOKE, AMEBIX, GODFLESH and GANG OF FOUR through to the greats of rock, punk, industrial and underground metal, OCTOBER FILE exploded into life with their 2004 debut album, "A Long Walk On A Short Pier", and the "How To Lose Friends And Alienate People" EP from the same year, both of which were released by U.K. imprint Golf Records. Embarking on a relentless slew of live performances which has seldom slowed since, the band — completed by vocalist Ben Hollyer and drummer John Watt — proved their dedication to playing in front of anyone and everyone and duly attracted the attention of the U.K. rock and metal press. Consolidating their notoriety with the EPs "Monuments" (2005) and "Hallowed Be Thy Army" (2006), which marked the band's upward shift to the prestigious Candlelight Records label, OCTOBER FILE made friends with KILLING JOKE frontman Jaz Coleman who then lent his vocal powers to the band’s second full-length album, "Holy Armour From The Jaws Of God", which emerged to widespread acclaim in 2007, adorned by the astonishing and unique artwork of revered artist Victor Safonkin.

Over the years that followed, OCTOBER FILE have performed at numerous high profile festivals in the U.K. and rest of Europe and have also toured with KILLING JOKE, PRONG, MINISTRY and FEAR FACTORY. The buzz around the band led to an association with GODFLESH/JESU mainman Justin Broadrick who offered to produce one of two distinct versions of their third full-length album, "Our Souls To You", which was again released with stunning artwork from Victor Safonkin amid a whirlwind of positive reviews in 2010.

More well-received shows and festival sets across the U.K. and beyond followed. Meanwhile, the band made a memorable appearance in comedy zombie flick "Zombie Driftwood", which was filmed in the Cayman Islands and released in 2010, contributing two songs — "Falter" and "Isolation" — to its soundtrack and joining the ranks of the undead in the process. Documenting the band’s triumphant show at Bloodstock in 2011, Candlelight Records released a limited edition CD and DVD set called "Renditions In Juxtaposition - Live At Bloodstock". It captures a unique band at the height of their collective powers.