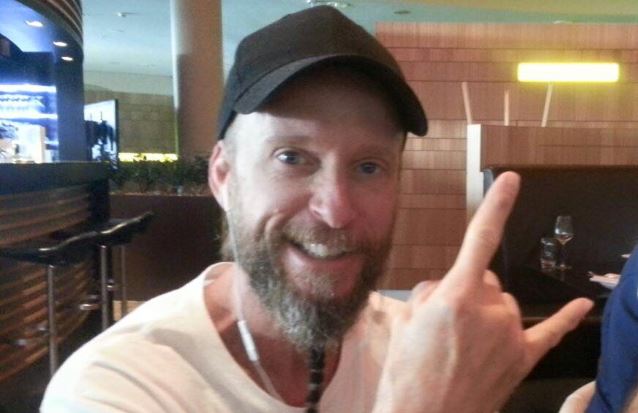 Niclas Müller-Hansen of RockSverige.se recently conducted an interview with drummer Donald Tardy of Florida death metallers OBITUARY. A couple of excerpts from the chat follow below.

Donald: Frank was a clown, like we all were. He was the first one to do something completely out of hand, just because we were bored and just because you have nothing better to do. Just because Frank is bored, someone's pants are gonna get pulled down right in front of everybody, when they're in line getting their dinner with plates in their hand and are completely defenseless. Or more personal stuff like doing something fucked up on the bus to make the band laugh, because we are in bad moods because it's a long travel. Shit like that. He was the first one to try to enjoy it and make you laugh and he was pretty good at that.

Are there any plans for a new album?

Donald: We always think about it and work on stuff, but for God's sake, don't even use the word new album yet! [Laughs] "Inked In Blood" (2014) is still just an infant and we have a lot of touring to do. This world is very big when it comes to getting on airplanes and go and let the fans see the "Inked In Blood" songs. We're gonna push this album as well as we can and we're having a good time doing it. Our lineup is great right now, the bandmembers are as tight as can be and the album came out as well as we hoped it could. When we're in the studio, we're always throwing riffs around and always remembering those and putting them in our back pockets, so there is no question that we have some new stuff and we're always sitting on some ideas that we will work on, bur right now we're focused on "Inked".

You used Kickstarter to finance "Inked In Blood". Do you think that's the way to go these days?

Donald: We raised a lot of money, but it was an absolute punishing chore because once we were finished, we realized we had 927 orders to fill. It wasn't just that they all got a sticker. Instead it was, "This dude from Texas is getting the medium shirt and a signed CD." We were still trying to finish the "Inked In Blood" album and we were working on the promotion for the upcoming U.S. tour for the album. To finish it all and trying to mix the album at the same time, it was a nightmare for us, but we did it. We busted our asses, we didn't ask for any outside help, didn't bring in friends, didn't bring in a third party to pack it for us — we stayed on our hands and knees for months packing it. Most in general, everyone got their shit and some people got it and it was damaged, but we were happy to send it again. We spent way more money than we thought on the shipping cost, so what was raised really did pay for the album and the actual product, like the shirts and the hats and everything. It paid for that and it was a cool experience, but I don't know if I wanna do it again. [Laughs] I don't think I ever wanna do that again, man. I would rather ask people to just pre order the album digitally on the OBITUARY site and give them the digital copy before anyone gets their hands on it. It was part our fault, letting everyone choose this size, pick this stick or Trevor's pick. It was a nightmare.

The scene in Florida? Do you have any idea what happened that made all these bands come out? Did it have anything to do with the "climate"?

Donald: That question's been asked since we were teenagers. Everybody's waiting for me to say it was the swamp water. We were all doing shots of swamp water and it was the humidity and the mushrooms we were all eating. I don't know, man. There's no answer to it. Complete coincidence, but also very talented individuals that made bands that happened to be in the same part of Florida and it really weaned out all the shit. If you weren't gonna hang with the big dogs, you weren't gonna stay a band very long. DEICIDE and MORBID ANGEL and DEATH, of course… Chuck [Schuldiner, DEATH mainman] was the one who showed us all. Once Chuck started writing those songs and the "Scream Bloody Gore" (1987) album, that was it. You were either gonna rise to the top or you were just gonna fall apart and not even be considered kind of a good band. There were really good bands. ATHEIST was one of the first where you were just watching them live and going "Goddamn!" and listening to the records going, "These dudes are fucking throwing down." It started before death metal, it started when we were really young and it was NASTY SAVAGE and SAVATAGE that were already killer. Riding my bicycle to listen to them in their garage. I think it was pure coincidence, a lot of talent and then the competition was there. You had to be good. If you were gonna play a show with Chuck, you'd better be ready to play well.