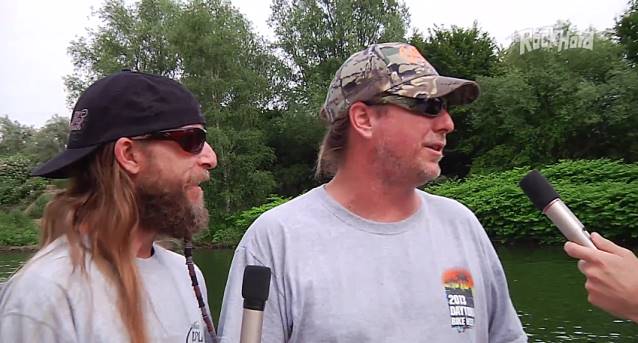 Vocalist John Tardy and drummer Donald Tardy of Florida death metallers OBITUARY were interviewed by Rock Hard magazine at this year's Rock Hard Festival on June 7 at Amphitheater Gelsenkirchen in Gelsenkirchen, Germany. You can now watch the chat below.

OBITUARY has partnered with Relapse Records for the release of the band's highly anticipated ninth studio album. The band's first full-length CD in over five years was recorded by the band this past April at its own RedNeck Studio in Gibsonton, Florida. The album recording was funded by an extremely successful Kickstarter campaign in late 2013.

Speaking about OBITUARY's decision to launch a crowdfunding campaign to aid the band in completing the new CD, Donald said: "It was a cool experience. It was different. The fans showed complete support, and that made us super proud. But it is a bit of a handful, and it's different enough to where a lot of people don't understand it and think we're begging. It's just 'cause it's a new concept, I think, [and] people don't quite get it, which, as a band, I don't think we quite got it either. But we went for it. We're the type of band that we're the first to try things, and we've always been that way. We're not afraid. To step outside the box is to experience the future, and that's kind of, I think, what's happening here with the crowdfunding. So it was cool to see that little bit of people raise the kind of money that they did and get some of the cool stuff that they got from us. So it was an experience."

OBITUARY's next album will be the follow-up to "Darkest Day", released in 2009 via Candlelight Records.

"Darkest Day" landed at position No. 32 on the Top New Artist Albums (Heatseekers) chart, which lists the best-selling albums by new and developing artists, defined as those who have never appeared in the Top 100 of The Billboard 200.

Guitarist Ralph Santolla, who joined OBITUARY in 2007 as the replacement for Allen West, has not played any shows with the group since 2011.