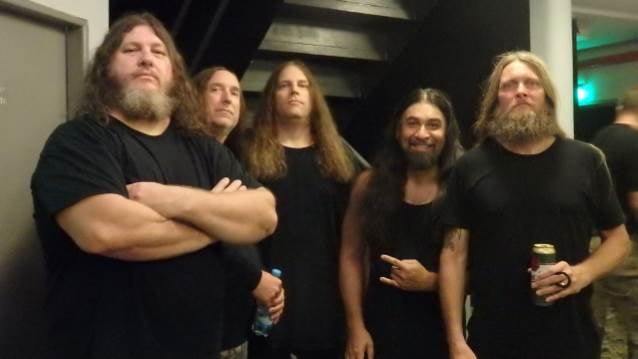 Florida death metallers OBITUARY have recruited drummer Lee Harrison (MONSTROSITY) to sit behind the kit for some of their shows in Europe after the band's regular drummer, Donald Tardy, was unable to make the dates.

Harrison took to his Facebook page earlier today to write: "So tonight will be my fourth show (temporarily) playing drums for the mighty OBITUARY.

"Donald had some things going on at home that he needed to be there for. I'm honored he called me to fill in, but it was also pretty stressful having to learn the set in such a short time (three days notice).

"Wishing Donald all the best and he will be back to his spot after this run, so don't worry. I'm just glad I could be there for him and somewhat pull this off.

"I've got three more shows to do and things will be back to normal for me. Tonight we rock Krakow, Poland!!! Come out if you can!"

Fan-filmed video footage of OBITUARY's July 28 performance in Wroclaw, Poland — featuring Harrison on drums — can be seen below.

Donald said in a recent interview with the "Mosh Mag" podcast that OBITUARY is in no rush to return to the studio to begin work on the follow-up to last year's self-titled effort. "We are super happy with what's going on right now," he said. "We're supporting this new album. It's probably the best album we've ever written. We know 'Slowly We Rot', 'Cause Of Death' and 'The End Complete' are the albums that people will always remember OBITUARY [by], and we're cool with that; we're very proud of those albums. But 30 years into it, to still write an album that's still that relevant, we're super proud of the songs; the production fits it perfectly. So we're gonna support this album. We're gonna see every corner of the planet, 'cause fans wanna see OBITUARY, and we're gonna stay busy and do what we do."

He continued: "We're always thinking about new songs and writing riffs and this and that. But at this time of our lives and this time of the music industry… This new album has only been out for just over a year now, so we're in no hurry to try and push another album out of us as quick as we can; there's no sense.

"I'm a believer in when an album is a favorite album of a fan, they're gonna listen to that thing again and again and really worship it," he added. "I mean, [DIO's] 'Holy Diver' album is how old? It's 20-something years old, and I still listen to 'Holy Diver' almost every day of my life, so it's not, like, 'Oh, after two years, you need a new album.' I think metal fans understand that. And OBITUARY's catered to a live show. It's fun doing albums, and you get proud for making songs and making albums, but there's nothing more awesome than live shows and seeing the fans come out and giving them what they want, which is just a kick-ass show and having a good time."