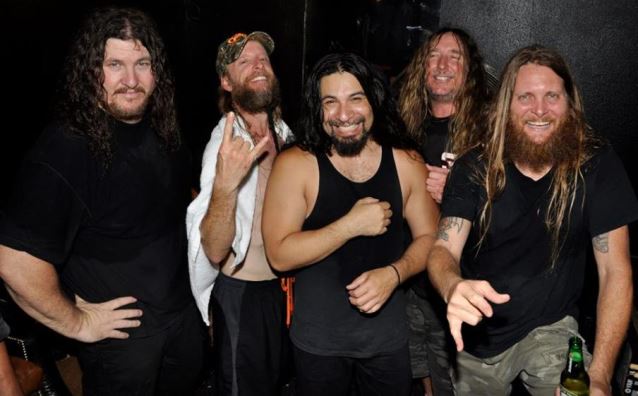 Florida death metallers OBITUARY have completed the songwriting process for their next album, tentatively due in early 2014. The band states; "We will take our time, trim the fat and focus on making these bass boys as bad-ass as possible. We can't be more excited how they are turning out and are so ready to start recording them! You guys will be so proud of us when you hear it. The old Florida rednecks pulled one out of the bag and created a sick record! Fast, slow, mid-tempo groove, gut-wrenching and heavy as all get out!! Can't wait for you to hear it!"

OBITUARY kicked off a short East Coast tour in early October with a pair of back-to-back shows at Saint Vitus Bar before flattening nine more venues through October 20.

Having been holed up in their own Redneck Studios the last few months penning the follow-up to 2009's punishing "Darkest Day" full-length (2009), OBITUARY's recent shows served as a temporary writing break.

The as-yet-untitled full-length will be recorded with the Kickstarter funding help of their legion of dedicated fans around the globe. The campaign was rooted in an honest desire to produce the next record on the band's own terms.

"If there's one thing that we've learned touring all these years, it's that OBITUARY fans are among the most loyal and supportive motherfuckers in the world!

"We've been trying to find better ways to engage with and give back to our fans.

"Over the past couple of years, we've streamed concerts live from around the globe, given away tons of merch packages and dozens of all-access backstage passes. It's inspiring to see and share in your excitement about OBITUARY, and the inspiration that provides keeps us going. This is about putting our trust, our music, our career, and our new album in fans' hands! We want to make music for the people who still come out to shows, still sport our gear, and still have a 'Slowly We Rot' cassette in their car."