Florida death metal godfathers OBITUARY collide with Bay Area thrash metal kings EXODUS for another epic "Battle Of The Bays" this fall! The two American legends went to war in Europe last year and are now bringing the battle to America, this time with support from POWER TRIP and DUST BOLT. The co-headlining tour kicks off September 14 in Durham, North Carolina and ends on October 15 in Baton Rouge, Louisiana. Tickets go on sale this Friday, June 16.

* No EXODUS
+ OBITUARY, DUST BOLT only

OBITUARY's new, self-titled album was released on March 17 via Relapse.

Picking up where 2014's "Inked In Blood" left off, OBITUARY show no signs of slowing down as they continue to reign as kings of death metal. Recorded at the band's home studio in Tampa, "Obituary" is a ten-track tour de force of bone-pulverizing death metal that is as heavy, uncompromising and infectious as anything they've released in the group's historic, nearly 30-year career.

The band recently took part in the 2017 Decibel Magazine Tour with KREATOR, HORRENDOUS and MIDNIGHT. The tour kicked off on March 17 in Charlotte, North Carolina and ran through April 15 in Philadelphia, Pennsylvania.

EXODUS drummer Tom Hunting spoke to the "Mike James Rock Show" at this past weekend's Download festival about the progress of the songwriting sessions for the band's follow-up to 2014's "Blood In Blood Out" album. He said: "We're just structuring songs right now. I think we've probably got five or six maybe, and the makings for the rest of 'em — bits and pieces here and there."

When asked if EXODUS writes any music on the road, Hunting said: "We kind of do that now a little bit. I mean, Gary's [Holt, guitar] making riffs right now. He's out [on the road] with SLAYER, and we're out here doing this run. And then we connect back home. We're playing with IRON MAIDEN on July 1st [in San Bernardino, California]."

"Blood In Blood Out" was EXODUS's first album since the departure of the band's lead singer of nine years, Rob Dukes, and the return of his predecessor, Steve "Zetro" Souza, who previously fronted EXODUS from 1986 to 1993 and from 2002 to 2004. 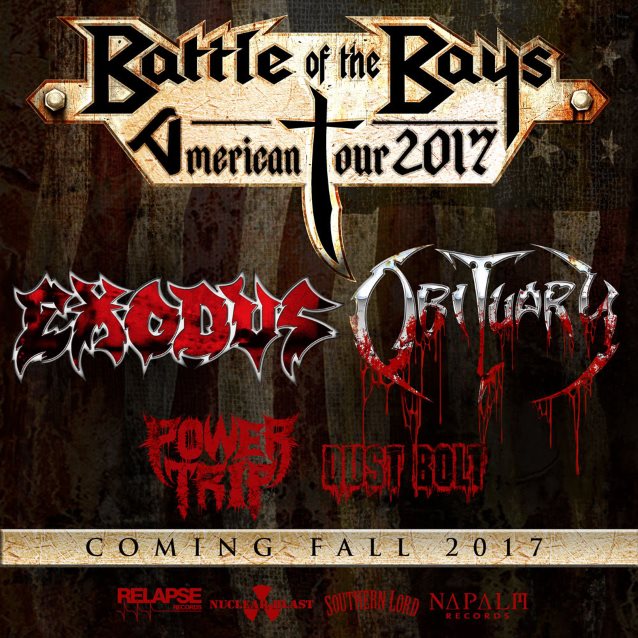