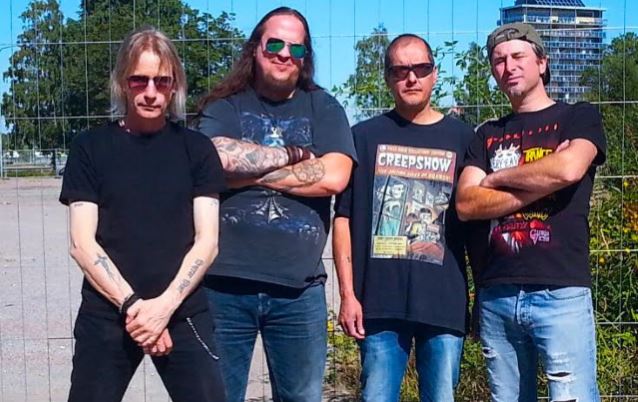 NWOBHM legends JAGUAR have announced the addition of Swedish vocalist L-G Persson to the group's ranks.

In September 2014, JAGUAR parted company with their previous vocalist Jamie Manton following their appearance at Sweden Rock Festival in June the same year. Since then, the band has been searching for the perfect vocalist both in the U.K. and Scandinavia, as the band founder Garry Pepperd planned to move to Sweden to settle down with his Swedish-born fiancée. In November the same year, the band released its long-awaited album "Metal X" on GoldenCore Records/ZYX Music, mixed by Mike Exeter (JUDAS PRIEST, BLACK SABBATH).

In April 2015, Garry Pepperd moved to north Sweden with his fiancée, and in August, the band finally found the perfect fit in vocalist L-G Persson from the Swedish heavy metal/power metal band THE STORYTELLER from Gävle, with L-G regarded by many as one of the best heavy metal vocalists in Sweden today.

L-G is a very experienced vocalist who brings with him a wide range of different vocal registers and styles. Although he is best known as the frontman of THE STORYTELLER, he has also appeared on many other Swedish heavy metal projects.

JAGUAR is now planning a new beginning to put the band into a higher gear with L-G on board.

JAGUAR says: "We are looking forward to meeting our fans in Europe and we will do our best to visit other parts of the world too. We know our fans will love L-G as much as we do as he totally blew us away! See you all very soon!"

METALLICA's Lars Ulrich shared some words about JAGUAR in the "Metal X" sleeve notes, stating that he has always been a huge fan of the band. The CD also featured a special bonus track which METALLICA fans are familiar with.