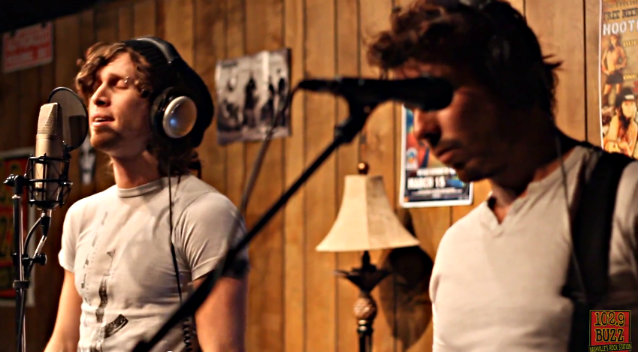 San Antonio, Texas alternative rockers NOTHING MORE recently played an acoustic set in the studios of Nashville's Rock Radio 102.9 The Buzz. You can now watch video footage of the performance below.

NOTHING MORE's first single, "This Is The Time (Ballast)", has just hit No. 1 on the rock radio chart, nearly two months after climbing into the Top Five. Frontman Jonny Hawkins told The Pulse Of Radio that he hopes the themes of the song and the band's self-titled debut album are resonating with listeners. "I hope that it's an encouragement to others out there that can listen to the record and if any of it, just really the experiences, translate to other people and they recognize that maybe they're going through something similar or they can feel that same pain, that there is a way through it and there's calmer waters ahead if you stick with it and remind yourself that things will be all right and just stay the course," he said. "So I hope it's encouraging."

NOTHING MORE's self-titled debut album sold around 8,600 copies in the United States in its first week of release to land at position No. 33 on The Billboard 200 chart. The record arrived in stores on June 24 via Eleven Seven Music.

The band's current tour launched on August 5 in Kansas City and wraps up on September 12 in Portland, Oregon.

NOTHING MORE will next join FIVE FINGER DEATH PUNCH, VOLBEAT and HELLYEAH on a major trek beginning September 16 in Salt Lake City.