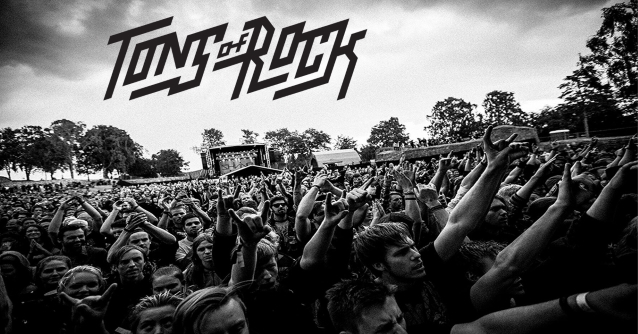 Tons Of Rock was founded in 2013 and has grown to be one of the leading festivals in Norway. It has become a national institution that attracts rock and metal music fans from across the world, and last year won Best Festival in Norway.

After securing SLAYER as a headliner for the inaugural festival, Live Nation Norway and Tons Of Rock worked together closely over the years, leading to appearances by BLACK SABBATH, OZZY OSBOURNE, ALICE COOPER, GHOST and FIVE FINGER DEATH PUNCH, among other international stars.

"We have worked with Tons Of Rock from the very beginning and are excited about our future with the festival," said Martin Nielsen, head promotor of Live Nation Norway. "The Tons Of Rock team have demonstrated an outstanding commitment to the festival and to audience experience."

In 2019, Tons Of Rock will move to the new and spectacular location of Ekeberg in Oslo. The timing of the move was perfectly aligned with the deal and will give more fans access to see the acts they love. Ticket sales have rocketed, and with major headliners like KISS, VOLBEAT and DEF LEPPARD, this year's festival looks set to be a vintage year.

"We are ready to take the next step in the festival's journey and the lineup for the 2019 festival speaks for itself," said Jarle Kvåle, festival manager and one of the founders of Tons Of Rock. "After five successful years in Halden, we saw potential for further growth. We found the perfect venue at Ekebergsletta in Oslo and wanted a strong strategic partner who would help us continue to grow. The answer was obvious, and close at hand, Live Nation Norway."