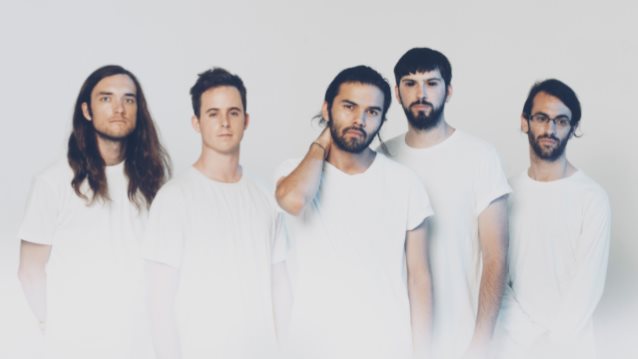 NORTHLANE has released a brand new music video for "Heartmachine". The clip, which was directed by Jason Eshraghian, can be seen below. The deeply personal song about the human condition is off of the band's most recent release, "Mesmer", and is the final video in the "Mesmer" collection, which was alluded to in the album trailer released right before the surprise album drop. Previous releases in the collection include "Citizen", "Intuition", "Solar" and "Colourwave".

Frontman Marcus Bridge explains: "'Heartmachine' is a song about pain, heartbreak and loss. When the heart wants to heal and move forward, anxiety and depression work like a machine to drag you down again and again.

"I wrote this song in the studio after feeling low for months about a relationship that had fallen apart on top of other personal issues. I almost immediately felt a weight lifted off my chest when I started to release that pain through this song. As I let go of my heartbreak, represented through my relationship with the female character in the music video, my strength grows and I'm finally able to control my power at the end of it all."

NORTHLANE released "Mesmer" in March 2017 with no forewarning. The album debuted at No. 3 on the ARIA chart and earned the band its second ARIA Award for "Best Hard Rock / Heavy Metal" album that same year. In 2018, "Mesmer" was nominated for an AIR award (Australian Independent Record Labels Association) for "Best Independent Hard Rock, Heavy or Punk Album," as well as "Best Artwork" at the Heavy Music Awards.

The Sydney natives formed in 2009, and with four successful albums under its belt, NORTHLANE has become one of the most successful heavy music acts in Australia.