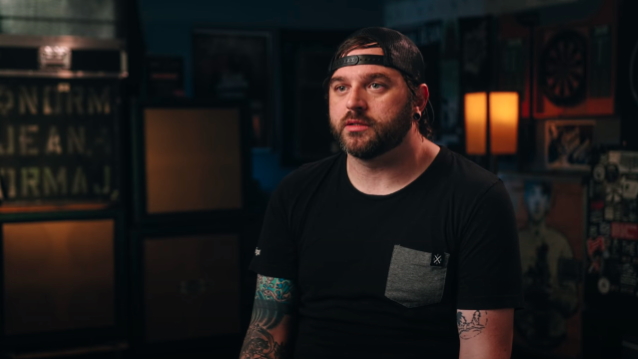 NORMA JEAN vocalist Cory Brandan has apologized for sharing a GIF on Twitter over the weekend that appeared to mock "Black Lives Matter". The GIF read "BLAH BLAH BLAH BLAH" in large black letters reminiscent of the same font used by the international human rights movement that campaigns against violence and systemic racism towards black people. His caption simply read "Roll credits."

Although Brandan quickly deleted his original tweet, screenshots of it were circulated online, with some fans calling for other metal and hardcore groups to "never tour or associate with this band again."

Earlier today, Cory released the following statement via NORMA JEAN's social media: "Monday, in frustration about infighting I was reading between groups with the same goal, I posted a gif without considering its context. A friend let me know the next day that it was similar to a BLM graphic, hurting supporters of the movement, so I deleted it. But the damage was done.

"I had been up late following conversations about black out Tuesday. I saw creators and supporters extremely divided in approach and was calling it a night. I flippantly searched 'blah' and I saw the scrolling gif looking like the credits at the end of a movie. That gif inspired my text 'roll credits,' to say 'goodnight, I'm out'. My ignorance to the gif's reference is obvious to me now, though it wasn't my intention.

"Later that night, I retweeted a post from a supporter who was posting their frustration with the black out Tuesday squares driving information off the Black Lives Matter feeds.

"This was all before the shit hit the fan on Tuesday with the screenshot of that gif post. I know I should have shown my empathy rather than posting gifs and retweets.

"Let me be clear though, Black Lives Matter.

"I understand how my shit-talking attitude, sarcasm, and the way I present myself online made it easy for people believe it was an act of aggression and not an ill-informed misstep. That's on me, too. I take responsibility for all of it.

"I respect the scene and I just ask that the other guys involved with NORMA JEAN and HUNDRED SUNS would not have to suffer for my mistake. They are still posting in solidarity with the Black Lives Matter movement as they have been all week. They are vocal supporters and this should not reflect on them at all. No one else should have to bear the weight of my actions or the responsibility of educating me. All of that is on me alone.

"I'm sorry. I don't expect your forgiveness, but I will be better, because you deserve better."

This was actually posted by a musician in the hardcore scene. You actually had to think about this and hit send. This tone deaf insensitivity is just appalling. pic.twitter.com/mX073YUqzN