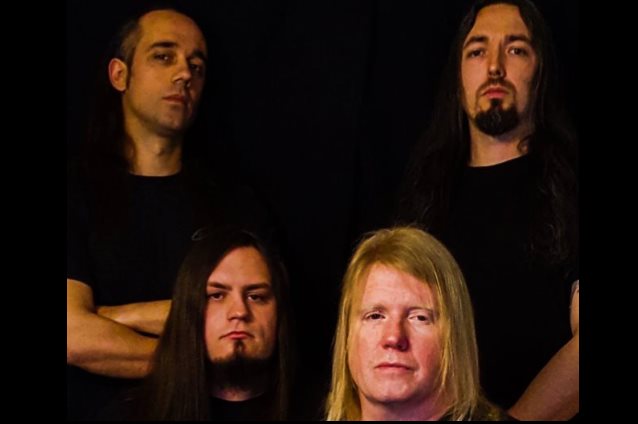 South Carolina-based extreme technical death metallers NILE have written six songs so far for the follow-up to 2015's "What Should Not Be Unearthed" album. The upcoming effort, which is tentatively due in 2019, will mark NILE's first release with new guitarist/vocalist Brian Kingsland, who replaced Dallas Toler-Wade last year.

Speaking to Metal Mad TV at last month's Hellfest in Clisson, France, NILE drummer George Kollias stated about the progress of the writing sessions for the band's next disc (see video below): "We only have six songs ready, but they're not a hundred percent ready. So we didn't wanna [play] something [at Hellfest that is] not finished. I think everybody has to wait for next year, when the album is gonna be out."

Guitarist Karl Sanders added: "It's not an overly complicated process. We start writing the songs, and we share demos back and forth, and we all contribute and try to shape the music. But we've been interrupting the process with tours here and there. So we start on a few songs, we tour, come home, work on a few more, then go back on tour, come home, work on a few more. But now this last thing that we're doing here with Hellfest will be the last thing we do for this… touring for this record. After that, we're done, so we can focus completely on the new songs."

Last year, Sanders told Metal Wani that NILE's new album would be produced by Erik Rutan, who has previously worked with MORBID ANGEL and CANNIBAL CORPSE, among others. "I don't know exactly how that'll work out, but I think it's time for a change," he said.