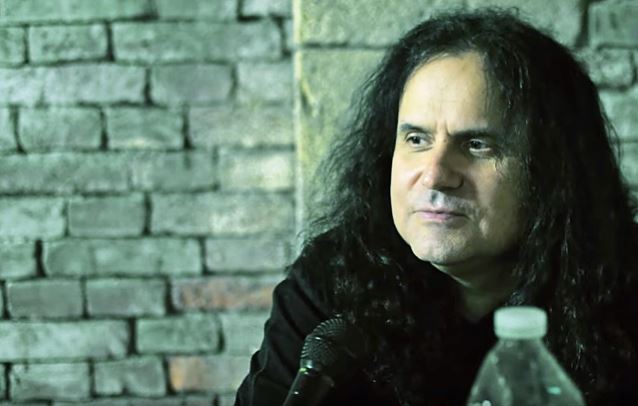 Romania's Metal Maniac conducted an interview with guitarist/vocalist Mille Petrozza of German thrash metal veterans KREATOR on August 6 at the Brutal Assault festival in Josefov, Czech Republic. You can now watch the chat below. A couple of excerpts follow (transcribed by BLABBERMOUTH.NET).

On when fans can expect to see KREATOR's follow-up to the 2012 album "Phantom Antichrist":

"I'm having ideas for a couple of songs, but, to me, it's important to wait for the right moment to come, to get together with the band to rehearse the songs. At the moment, I don't have much to say, really. Maybe in 2017. But maybe next year we'll start writing. I don't think it's gonna come out next year, though. You know how quick time passes…

"In my perfect world, we would start rehearsing for the album in January 2016, then record it in the summertime, because we wanna go to Sweden [to record the album with producer Jens Bogren], and we don't wanna go there in the wintertime. And then release it in 2017… January or something. That's my plan, but I don't know if that's gonna [pan out].

"[All of us in the band are] on the same page — we don't wanna release something that we're not a hundred percent happy with. And I'm always preparing the songs, and then we go in and play. And when we jam sometimes, we have better ideas even.

On why he is not interested in teaming up with SODOM, DESTRUCTION and TANKARD for the "Teutonic Big Four" tour:

"If you work as a band and you try to come up with good stuff and write great albums that matter and stand the test of time, so to speak… I don't think about the past too much. And this whole 'Teutonic Big Four' thing is a thing of the past, if you ask me, so that's why I'm not really interested. But I love the guys; I love all of those guys — I love [SODOM's] Tom [Angelripper], I love [DESTRUCTION's] Schmier; they're awesome guys — but I'm just not into going too deep into this, because it's a thing of the past.

"To be honest with you, we live in the present, and I want the present to be… For us, for KREATOR, the present should be what matters the most."

"To me, KREATOR has always been about progressing, changing, developing with the scene — being a part of the scene, being a part of the extreme metal scene. That, to me, is more important than going on a nostalgic trip. So KREATOR's about the here and now, and that's why we take our time [to make] albums. We really plan things; we don't just do things randomly. And that's why I'd rather concentrate on my new record [and] on the live shows than recycling the past."